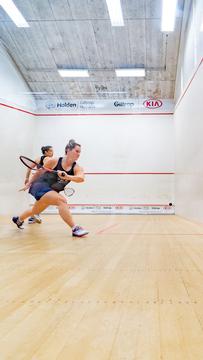 There’s plenty of talent lining up for the Liquorland Howick Open, a PSA Squash Challenger event for men and women with players ranked inside the top 150 world rankings.

The tournament will highlight squash and players from around the country at the Howick Squash Club from Friday 16-18 July with the women’s and men’s finals from 1.15pm.

The draw includes former top-40 ranked and Gold Coast Commonwealth Games gold medallist, Amanda Landers-Murphy who is playing some domestic tournaments again after taking the last year off from the sport. Landers-Murphy won the gold medal when she combined with Joelle King to take out the doubles title on the Gold Coast with an incredible performance where she stepped up when needed most in the final.

Top-ranked in the  women’s draw is Auckland’s Abbie Palmer ranked 117 who has represented New Zealand the at the world teams event. Fifteen-year-old Ella Lash from the Belmont Club on the North Shore is the second seed and already has a PSA World ranking of 205 as a senior.

Fellow teens, Katie Templeton (Katikati) and Sophie Hodges from the Waikato are the third and fourth seeds respectively.

In the men's draw New Zealand No.3 Lwamba Chileshe heads the entry list with a world ranking of 126 with younger brother, Temwa at 140 one of his main rivals along with plenty of depth in the entries from around the country.

However to mix up the draw there’s Australian No.1, Joseph White who has a world ranking of 135 and will be keen on a good result after losing in contentious match in the quarter-finals at the Barfoot & Thompson Auckland Open in May. White will be the second seed in the tournament and is travelling to Auckland again after the majority of tournaments in Australia have been cancelled or postponed.

The PSA Challenger tournament will be Facebook live streamed on the main court on Howick Squash Club's Facebook page. The weekend also features a number of other divisions playing tournaments around the professional event, to create a real atmosphere.