If you love traditional squash but want longer rallies and to be able to play the game at a slower pace, Racketball (aka Squash57) is perfect for you. Played on a standard squash court, all you need to play Racketball is a slightly larger racket and a bigger, bouncier ball - which encourages an easy to adopt form of squash. Although Racketball may be considered a 'lighter' version of the game, it is great fun, offers a great workout and is ideal for beginners, those advancing in years or anyone wanting something a little different.

Racketball is played on a squash court, you just need to have a Racketball racket and ball which you can buy from Pro Shops, or your local club may have equipment available you can borrow. There are two types of Racketball balls – blue and black. Blue balls are slightly bouncier, so ideal for recreational play or beginners. Black balls are less bouncy, and are used mainly in events such as Championship events. If, after a few games, you find the blue ball too easy, you can then progress to using a black ball.

The larger squash equipment makes it easier for beginners and less mobile players to pick up the skills and have fun. Squash NZ has a special deal available for clubs wanting to offer Racketball to players - for only $399.00 + shipping, a club can get 6 Dunlop Blackstorm Racketball rackets and 9 Racketball balls (6 x Pro, 3 x Competition). 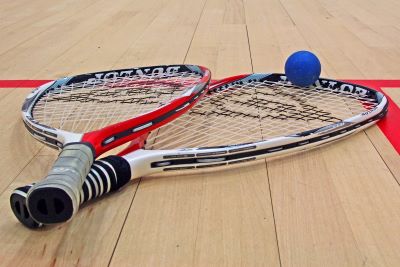 The great thing about Racketball is the rules are very similar to Squash, with a few minor variations around the serve.

The main points to note are;

While there are only a few variations between the singles versions of Squash and Racketball, Racketball Doubles carries a few additional differences - mostly notably all players play alternate shots.  This means all players are involved in the game for equal amounts of time and brings new strategies to the game.

Key points to note are;

Server
Each team nominates its server for the first game. That player serves for the whole of game one and game three in a five-game match. The other player serves for game two and game four (if played). In the final game (3rd or 5th) when the first side's score reaches 5 if playing up to 11, or “7” if playing up to 15, the server changes for both teams

Let
If a player is hindered by their own partner, there is no let and the rally is lost

Looking to offer Racketball at your club?

Find all the resources and templates you need to successfully offer Racketball at your club right here.  We'll be continuning to add items regularly.

Demo Nights – invite players along to try it out for free.  Have equipment available and current members there to help out.  You can also incorporate it into your regular club nights and have one court running just for Racketball

Racketball Programmes – the UK Racketball website has a great selection of session ideas from Beginner Racketball to Intermediate/Advanced, to Ladies Only sessions

Business House – run a 4-6 week competition and invite players to form their own teams to participate.  You can use any combination of team numbers and scoring methods.  To keep it simple have three players per team, and best of 3 PAR11 scoring

Fast 8 Draw – this is a mini-tournament played out over two to three hours.  Make a standard 8 draw with all matches being best of 3, PAR8 (sudden death point at 7-7).  All players will get 3 matches in this quickfire format

Doubles – twice as social, twice the fun!  Just remember Racketball doubles is played alternate shot - check out the video in the Racketball Doubles section above to see it in action