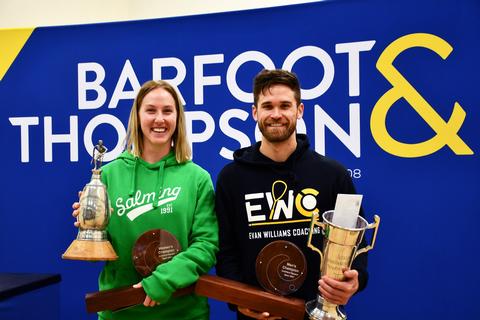 If anyone doubted the determination of New Zealand men’s squash No 2 Evan Williams they would be sorely disappointed as the 31-year-old from Wellington continued to hold off all rivals for yet another PSA Challenger title, this time at the Barfoot & Thompson Auckland Open.

Chileshe had tried on a number of occasions to beat Williams this year as the Commonwealth Games rep has now won four PSA Challenger titles; Henderson, Waikato and Panmure adding the bigger Auckland Open title to his credit.

Williams, is now undefeated since October 2020 and with the NZ Champs coming up in Wellington at his home club, the veteran is keen to continue his string of victories.

Chileshe started the final in great fashion winning 11-9, and then won the second game 13-11 and an upset on the cards. Williams held his nerve to win the third 15-13 and then the fourth 13-11. There was nothing in the match for either player who kept the game tight with any loose shot pounced upon and any unforced error greatly received.

Into the fifth game 20-year-old Chileshe had a total of five opportunities to win the match, finding himself ahead 10-6 only to have a couple of great shots from the top seed and a couple of unforced errors to let Williams back in the match.

There was another opportunity at for Chileshe to win, but again Williams held on only to another chance to win at 12-11, but the younger player hit the tin and let the top seed back in for a 14-12 win

For Williams the title meant a lot, but was tough mentally as well physically.

“I’ve had a good run so far this season. This match was very, very much a mental battle, I feel like I got outplayed for the majority of that game, but experience prevailed. I backed myself when I was down. I once got told that winning is a habit, Temwa is playing very well, but my confidence and momentum probably carried me through in the end,” said Williams.

In the women’s final it was a battle between two Australians, second seed Jessica Turnbull ranked at 66 in the world defeated top seeded countrywoman, Sarah Cardwell  in a four game contest.

The two flatmates didn’t hold back in their match with plenty of well-constructed rallies making their trip across the Tasman worthwhile and putting paid to their New Zealand rivals.

The eventual scoreline 11-9, 9-11, 11-3, 11-6 to Turnbull who controlled the points well and despite dropping the second game appeared to have the better constructed points on the day to win her third PSA Challenger title.

Rewatch the finals below: