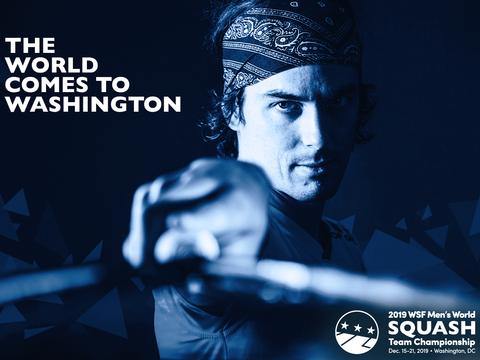 The team has three players at their career high rankings with Paul Coll No.5 in the world, Campbell Grayson, 31 and Lwamba Chilese at 160. The fourth member of the team is Evan Williams from Wellington who is ranked 104.

Coll from Greymouth, but based in Europe will be seeded fourth at the men’s individual world championships in Doha, Qatar starting this weekend. His form so far this season has seen him win the French Open, reach the quarters at the US Open and the semifinals at the Egyptian Open.

“I’m very happy to be selected for play for New Zealand. It’s always a proud moment to represent the fern. I’m also looking forward to teaming up with familiar faces and welcoming in the new blood to the team too,” said Coll.

Thirty-three-year-old Grayson, a former Aucklander, now based in Boston has had a good season with a victory at the Houston Open and a finalist finish at the Cleveland Open, earlier in the year he won the Irish Open to start a real revival in his career.

The youngest member of the team, Chileshe, has steadily improved his ranking and performances with a semifinal finish in the Challenger tournament in Auckland plus a first round win at the PSA 30 tournament in Cleveland and has been playing in the strong Dutch and English squash leagues as well as training with Coll in the UK.

For Chileshe there’s plenty of pride in representing his nation for the first time at a senior level.

“"It's an exceptional feeling having been selected for the New Zealand senior team as a 20-year-old. I can't explain how excited I am to wear the fern and play alongside New Zealand’s top squash players Paul Coll, Campbell Grayson and Evan Williams and play against some of the words best,” he said.

A total of 23 nations will compete for the title, Egypt will be the tournament favourite with six players ranked in the top 10 to choose from, Germany, England and France are also likely to be contenders while New Zealand depending on its draw has the ability to make the top eight and beyond.

New Zealand finished sixth at the last world men’s teams champs in France in 2017. The best finishes by New Zealand was second in 1977, 85 and 87.

The team will be led by former New Zealand professional player and coach Glen Wilson.