Inclement weather has provided an unexpected challenge for the top seeds at this weekend's South Island Championships in Invercargill. 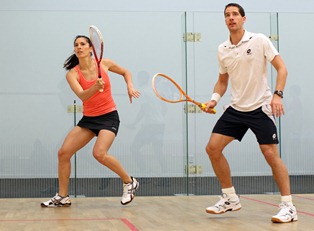 Joelle King and Martin Knight have been forced to drive down from Christchurch, after their flight was cancelled due to snow.  The seven and a half hour journey is not the preparation either player had hoped for ahead of a major national event.

King is still expected to dominate the women's draw, after showing some superb form on the WISPA World Tour lately.  The world number 13 finished runner-up twice last month and also made it through to the quarterfinals of the prestigious British Open in London.  Her main rivals are expected to be Aucklanders Rachel McLeod and Holly Donnelly, while fourth seed Tanya Colyer is flying the flag for the locals.

Knight faces a tougher task in the men's draw.  The world number 46 will be hoping to have recovered from his arduous journey by Sunday, when he is seeded to meet fellow touring professional Campbell Grayson in the title decider.  Young Aucklander Lance Beddoes is seeded third in the draw, with Southland's Shaun Madden rounding out the top four.

The South Island Championships get underway at 5:30pm on Friday.