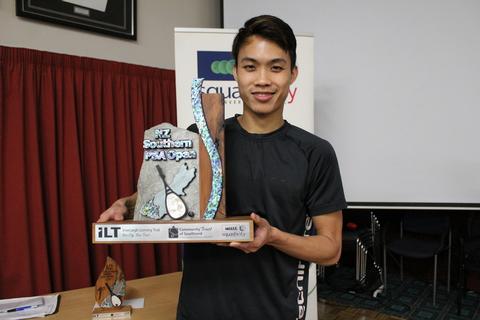 For Yuen, a Commonwealth Games player for Malaysia it was also his second title in New Zealand in recent weeks after winning the PSA event in Palmerston North.

Yuen, 27 was a beaten finalist in Invercargill a year ago, but wasn’t going to let go of the title on this occasion with the hope of improving his current world ranking of 71.

The match started with both Yuen and Hedrick another Commonwealth Games player at the Gold Coast patiently rallying, waiting for the right ball to attack.

Yuen was slightly more accurate, placing the ball tight and forcing loose shots from Hedrick for an 11-7 first game.

The second saw a much more determined Hedrick, playing with more positivity and holding his shots at the front .Yuen appeared rattled as the Aussie won the set 11-7

The third was a long, hard fought set, with both players working to increase the pressure, Yuen stepping it up a bit further at the end to win the tie-break 13-11 and gain the one-set advantage.

Yuen again came out hard in the fourth, upping the pressure on Hedrick even further and gaining a strong lead and not letting go. The Malaysian eventually taking the fourth game 11-8 and the match in 72 minutes total.

For Hedrick, 29 it was a tough loss having been a finalist in Invercargill in 2014 and a semifinalist on two other years.

The PSA tour now moves to Auckland this week for the US$10,000 Squash XL Open where Hedrick will be the top seed.