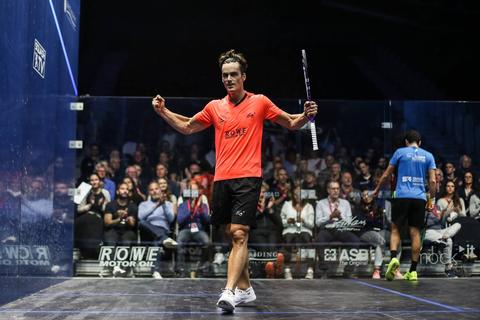 New Zealand’s world No.10 Paul Coll secured a quarter-final berth for the first time in his career at the British Squash Open after defeating Egypt’s former World No.1 Karim Abdel Gawad in a tight contest this morning.

Currently ranked No.7 in the world Gawad started the match in top form as he took the first game by a comfortable 11-3 margin as he found his length and range quickly.

The Egyptian, who came from 2-0 down against England’s Daryl Selby in round one appeared to lose his way slightly in the second as Coll came back positively with a more proactive approach to take the second 11-4.

In the third, Gawad managed to edge it to sneak a 2-1 lead as both players performed with good control to settle into the match to produce some quality finishes and strong pick-ups coming from Coll in particular.

Despite being 1-2 down, the Kiwi refused to be beaten and made sure to keep the pace high as his Egyptian opponent began to lose his accuracy allowing Coll to draw level once more before he completed a 3-11, 11-4, 8-11, 11-5, 11-5 victory to book a place in the quarter-finals where he will face top seed Egypt’s Mohamed ElShorbagy on Saturday morning (2am NZ time).

“It was a weird match, it's not one that I tend to enjoy,” said Coll following his win. “There wasn't much rhythm in the first few games and I wasn't consistent with my targets and his hands are too good. “But I'm happy with the last two, I just tried to take it early, hit my corners and try to get a bit of rhythm going.

“Withdrawing from El Gouna wasn't good, it was terrible, but it made me rest for a few days which was probably good, so I could freshen up [after Commonwealths].“Diego [Elias from Colombia) came and trained with me so I've had a good few weeks and I'm more excited to play again.

“It was a big Commonwealth Games and now I'm feeling good in my head and enjoying my squash.”

It is the first time a Kiwi men’s player has made the quarter-finals of a British Squash Open since Ross Norman in 1993.