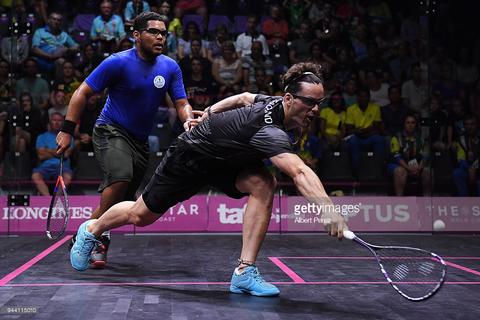 Joelle King and Amanda Landers-Murphy don't like making things easy. After dropping a match in group play they found themselves up against second seeded English pair Jenny Duncalf and Alison Waters, the same pair they had defeated in the final of the doubles world champs final last year.

It was always going to be a tough quarter-final clash. And it proved so in the first game with points level at eight a piece then moving to game ball to the English at 9-10 with a couple of let's not give to the Kiwis. Finally in nerve wracking rallies King and Landers-Murphy forced the score to sudden death where left-handed Landers-Murphy hit a winner for the game 11-10.

In the second game the Kiwis got off to a better start and were up 4-3 when they were awarded a penalty stroke to go ahead 5-3. From their they looked more assured and went on to take the contest 11-6 for a total match time of 22 minutes which has now set them up for a semifinal match with hometown favourites Rachael Grinham and Donna Urquhart tomorrow (Saturday) at 2pm local time (4pm NZT).

"In doubles there's quite a bit of momentum. We did really well to keep our foot down on the peddle. I think we played pretty well today. We gelled pretty well in the first and in the second we really stepped it up," said singles gold medallist King who when told that by the end of the day she would have played 13 matches over every single day of the Commonwealth Games so far with at least one remaining, King laughed and said "They've made me a little bed up out the back"

"Really happy to get through that one," said Landers-Murphy...."it was tough and they were a good team."

"I guess we're going to have the home crowd against us in the semis, but it will good to have noise and the crowd going for it in what will again be another tough match," said King

In the men's doubles quarter-final on a back court in front a jam-packed and vocal crowd third seeded Kiwis Paul Coll and Campbell Grayson took on the very experienced fifth seeded pair of Zac Alexander and David Palmer from Australia.

The Kiwis were up 8-5 in the first game but lost it 9-11. In the second game they again had a lead, this time 4-0. The Australian pushed back to 4-4, but the Kiwis held on this time and took the game 11-6. However in the third game the home team gained an easier start on the scoreboard going ahead 4-0 and having a buffer on the Kiwi duo all the way through to the final score 11-7 with a match time of 48 minutes. The closeness between the pairs showing as the Australians finished with 28 points in total compared to Coll and Grayson with 27.

"They played a good match...for me it's not over yet, there's plenty of squash still to come," said singles silver medallist Coll.

Later this evening (8pmNZT) King and Coll play their mixed semifinal against the Indian pair of Dipika Pallikal Karthik and Saurava Ghosal for a place in Saturday's final. The Kiwis are the top seeds and defending world champions.

By the end of the day Coll would have played 14 matches in singles, men's doubles and mixed over every day of the Commonwealth Games, with the prospect of more on the cards.