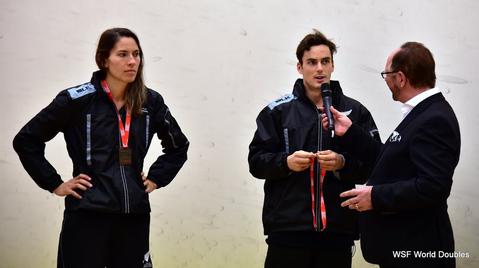 New Zealand hopes of Squash gold success in the Commonwealth Games in Australia this month were given a boost on Sunday when Kiwis Paul Coll and Joelle King both became the highest-ranked players in the men's and women's Singles events, respectively, according to the new April PSA World Rankings.

Both players are seeded to win silver - behind English favourites Nick Matthew and Laura Massaro.

Coll, now ranked nine in the world - just one place below his best ever No.8 - has overtaken former world No.1 Matthew, the two-time Commonwealth Games gold medallist who has slipped out of the world top ten for the first time since January 2009, to No.12.

King, a bronze medallist in the 2014 Games in Glasgow, has risen three places to return to a career-high world No.4 - replacing Massaro, the 2014 silver medallist, who slips to No.7.

Squash is celebrating its sixth appearance in the Commonwealth Games since making its debut in 1998 in Malaysia. The Men's and Women's Singles Championships will take place at Oxenford Studios in Gold Coast, Queensland, from 5-9 April, followed by the Men's, Women's and Mixed Doubles events from 10-15 April.

While Coll, 25, and King, 29, are currently enjoying some of the best successes of their careers, their English rivals are arguably in the twilight of their professional squash lives - indeed 37-year-old Matthew plans to retire at the end of the current season.

The three-time World Champion from Sheffield was the top-ranked player in both 2010 and 2014 - when he won gold in Delhi and Glasgow - and is unlikely to be too concerned by the latest ranking change.

"The Commonwealth Games has been a key landmark in my career as a whole and also in this final season," said the distinguished Yorkshireman when the draw was announced. "It's something I earmarked to prepare and peak for a long way out and am getting more and more excited the closer it's getting."

Massaro, the 34-year-old former world No.1 and world champion from Preston, boasts three silver medals from 2014 and 2010 - and will undoubtedly be focussing on a maiden gold in 2018.

Players from 28 nations will be competing in the two singles competitions, the full updated draws for which (including seeding) are as follows: