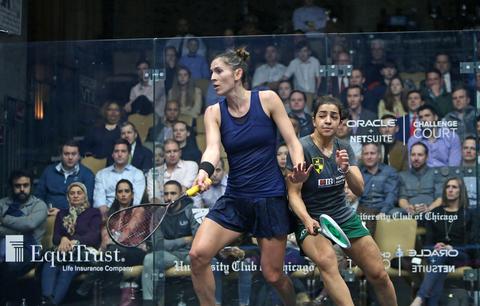 A good improvement in world rankings for New Zealand squash players Joelle King and Paul Coll with a month remaining until the Gold Coast Commonwealth Games.

On the back of a victory at the Cleveland Classic and a runners-up finish at yesterday's Windy City Open in Chicago King has moved from No.9 to world No.7.

The first three world ranking places are taken by Egyptians then England's Laura Massaro who King defeated on the way to her latest final is fourth. Another Egyptian is fifth followed by a French player.

King takes over the seventh spot and is now the second-ranked player from a Commonwealth nation.

Twenty-nine-year-old King has been ranked as high as No.4 in 2014 however a severe injury then put her out of the game for a considerable amount of time.

In the men's ranking Greymouth's Coll has moved from 13 to 11 in the men's world rankings. Egyptians dominate with seven of the top 10 rankings.

Coll is the second-ranked singles player from a Commonwealth country, just a few places behind England's world No.8 Nick Matthew.

Meanwhile other New Zealand Commonwealth Games team members are in tournaments this week.

Campbell Grayson ranked 33rd is already into the second round of the US$25,000 Montreal Open in Canada, while Evan Williams (Wellington) and Zac Millar (Waikato) are in the strong Auckland Open this weekend.