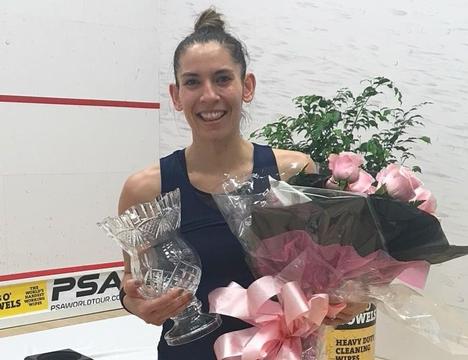 New Zealand squash pro, Joelle King ranked No.9 in the world has beaten the current world champion and No.2 ranked Raneem El Welily of Egypt to win the title at the US$50,000 Cleveland Classic in the United States.

King defeated El Welily 11-8, 11-8, 11-8 and was justifiably happy with her win, saying it was what she had been looking for in her game this year.

"She (El Welily) has been playing some amazing squash, but I was a bit hungry today. I had felt a little flat in my last couple of tournaments and I just wanted to play my best squash and see where it took me and it gave me a three love win today. If the last match we had is anything to go by it was 16-14 in the last set or something like that. It was brutal. She is someone I've idolised even though we're the same age, she's been someone I've looked up to as she was always so good, to come away with a win over someone of that calibre is a great feeling," said King who was keen to get her results

"The worst I'd done this year is finishing out to my seeding and losing to Nicol David this year, it's nice to finish off a block of three tournaments," said King, 29 who lives in Cambridge in the Waikato and play her next tournament in the US$250,000 Windy City Open in Chicago 22-28 February.

The New Zealand squash team for the Gold Coast Commonwealth Games will be named today.