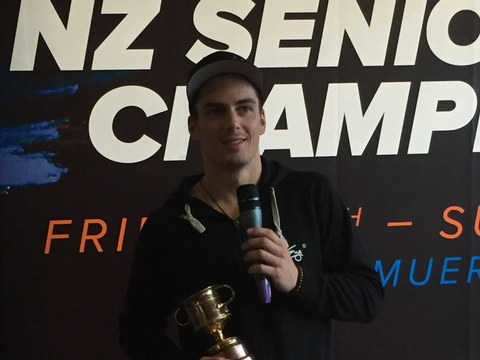 Paul Coll will be looking to go three in a row at the 2017 New Zealand Senior Nationals whilst Joelle King will be searching for her sixth title after missing the 2016 edition of the event.

The 2017 Men’s Draw will be headlined by current World Number 12 Paul Coll who will be returning to New Zealand for the first time since reaching his highest world ranking of 12. Coll who has had a superb 18 months on the tour has seen his ranking increase since his first National title in 2015, where he then held a world ranking of 56. Campbell Grayson will come into the event seeded second and looking to claim his third senior nationals title with his last win being in 2012. Grayson has a current World Ranking of 39, with the New York based player looking to set himself up well after winning the Squash XL $15K PSA event on the weekend. Evan Williams is seeded third in the event and has performed well in the June PSA series to date having finished Runner Up in the Gibson O'Connor North Shore Open 2017 and making the Quarter Finals of the Fitzherbert Rowe Lawyers NZ International Classic 2017, ILT-Community Trust NZ Southern Invercargill Open 2017 and Squash XL PSA. Lance Beddoes will be seeded fourth for the event with Ben Grindrod, Luke Jones, Zac Millar and Chris Van Der Salm rounding out the top 8. These players will be joined by experienced players who have competed in numerous Senior Nationals such as Kashif Shuja five times National Champion. All players will be looking to put their best foot forward as they try to make their way to the final.

The 2017 Women’s draw sees current World Ranked Number 12 Joelle King seeking to add her name to the Women’s trophy for the sixth time. King who was unable to compete in the 2016 edition due to a clash with the Hong Kong Open will be sure to put her best foot forward this year to claim the title. Amanda Landers-Murphy takes the second seed and is looking strong after having claimed the Gibson O'Connor North Shore Open 2017 and Matamata PSA titles. Megan Craig takes third seeding for the event and will be looking to try and take out Landers-Murphy having lost out to her in all 3 PSA events in May/June. Emma Millar was due to take the fourth seeding however due to injury she has had to withdraw, this now sees Kaitlyn Watts stepping in to the fourth seeded position and looking to make a strong performance. Jo Shanks, Abbie Palmer, Anna Hughes and Juee Bhide round out the top 8 players.

We wish all players the best of luck as they compete towards claiming the 2017 New Zealand Senior Nationals Title.

Livestreaming of this event begins at 9am Saturday and the link can be found here or below in this article.