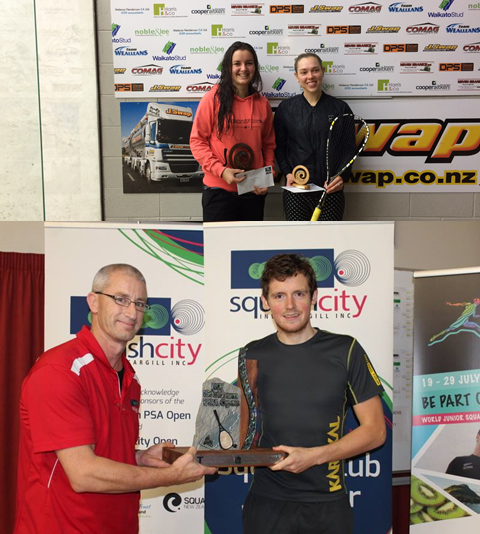 The final of the Matamata Open saw New Zealand's Amanda Landers-Murphy take on Scotland’s Lisa Aitken. Aitken had beaten Landers-Murphy the previous week in Palmerston North in a thrilling five setter with Aitken then proceeding on to take the Fitzherbert Rowe Lawyers NZ International Classic title. It was Landers-Murphy's day today as she was able to find great length and shot selection throughout her match putting the pressure on Aitken. Whilst Aitken tried to work her way back into the rallies with her attacking boasts it was not meant to be with Landers-Murphy taking the win in 3 (13-11, 11-5, 11-1).

A big thank you to United Matamata Squash Club for hosting this $5K Women's event, the final Women's PSA for 2017.

It was a tight and tense match between top seeded Ivan Yuen and fifth seed Greg Lobban this afternoon in the 2017 ILT/CTOS NZ Southern Open PSA Final.

Lobban continued with the form he had shown throughout the tournament, placing the ball with precision and applying pressure to Yuen. Lobban accumulated a substantial lead in the first set before Yuen began to come back, but Lobban held his nerve and took the set 11-7. The second set began point for point and this time it was Yuen who took the early lead but Lobban staged a massive come back to win seven points in a row to take a 2-0 set lead. Yuen returned in the third with much more focus, using a cracking pace on the ball to get it past Lobban and was able to take this set quickly 11-3. The fourth set saw both players giving their all. Yuen again streaked to a quick lead and it looked for a while like the match would move into a fifth set, however Lobban again gave a massive push to take the lead again and keep his hopes of winning alive. With the scores tied at 9-9 it was anyone’s game for the taking and an incredible rally which saw Lobban get himself out a scrambling defensive situation and back into position to attack then had to be replayed with a let called. In the replay of the point Lobban was able to place a drop that was irretrievable, giving him match-ball. From there he maintained his control of the match, placing his last ball out of Yuen’s reach to claim the 2017 ILT/CTOS NZ Southern Open title, his first $15k tournament win.

Thank you to the SquashCity Invercargill Squash Club for hosting this $15K Men's event for the fourth year in a row.

If you wish to listen to some alternative commentary over the weekend jump over to SPALK here.