Megan Craig, the current national Junior Champion from Blenheim, has been named as the fifth and final ambassador for the Year of Women's Squash.

Megan, who currently travels up to Auckland to train with the national coach and other squad members, was honoured when asked to be the final ambassador the programme - "To be in the same category as Joelle, Jaclyn and Susan Devoy is fantastic!" 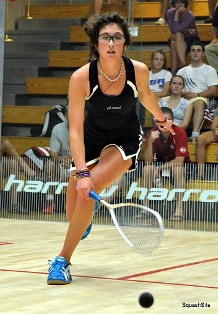 Below is a recent article produced by Megan's local paper, the Marlborough Express which explores her future ambitions.

For ambitious Blenheim squash star Megan Craig, this weekend's Marlborough Open is the start of of a busy nine months, by the end of which she hopes to achieve a couple of major goals.

Not only does the talented 19-year-old world No 89 hope to break into the top 50, she also has her sights set on making the four-person New Zealand team to go to France for the World Women's Championships in November. Craig is currently ranked fifth best woman in the country, with No 4 Amanda Landers-Murphy sitting at 57 in the world rankings and No 3 Kylie Lindsay at 48. Leading Kiwi females Joelle King and Jaclyn Hawkes are both inside the world top 20.

Previously, her standing as one of the country's top junior players has hindered her ability to play in enough Wispa (Women's International Squash Players Association) tournaments to significantly lift her world ranking. Only some excellent performances at the handful of Australian Wispa events she competed in last year, including winning her first professional event in November, saw her push herself inside the top 100.

Now a fully-fledged senior player, the hectic schedule awaiting Craig is proof of how determined she is to start making some serious moves towards the top of the world game.

After this weekend, where she is heavily favoured to win, Craig will play in the Auckland, Palmerston North and Waikato Opens over three consecutive weekends. These tournaments will act as perfect buildup for what is to follow. She is scheduled to play four Wispa events in Australia in each of June and July and a total of 12 Wispa tournaments throughout 2012. Valuable world ranking points are up for grabs at each one.

Although she is now aiming to make the New Zealand team for this year's world champs, a couple of months ago it was far from a given that New Zealand was where Craig's future lay in international squash.

In November she received an extremely lucrative offer from Squash Australia to change her allegiance. While she has no ancestral background in Australia, international squash rules state only that a player must stand down from one country for three years before being allowed to compete for another. The offer would have allowed her to live and breathe squash at no expense as part of the AIS (Australian Institute of Sport), giving her fulltime access to world-class facilities and coaching.

It took two months of hard thinking, but eventually Craig said she decided she could not turn her back on her country of birth.

"It was a tough couple of months, but I just thought I've spent so long trying to play for New Zealand and it would just be embarrassing playing for Australia. I want to play at the Commonwealth Games and if I do I don't want to walk around with Australia on my back ... black and white seems more like me, I'm not that keen on green and gold."

Another swaying factor was how much she is enjoying her current training regime.

Based at home in Blenheim, she has been travelling to Auckland at least once a month for a week or two at a time. There she trains with the national squad and works with new New Zealand coach Englishman Paul Hornsby, who she is "really enjoying". When she comes home she is able to work at her game and fitness in a more relaxed environment, with the support of family and friends close at hand.

Newly appointed as one of five Squash NZ Women's Ambassadors, Craig's hunger for success continues to grow and it appears only a matter of time before those goals are due to be replaced.

To help fund her travels this year, Craig is holding a fundraising dinner and auction at the Clubs of Marlborough next month. It will be held on Tuesday, April 24 and includes Dame Susan Devoy as guest speaker, another ambassador for the Year of Women's Squash. More details will be published closer to the event.