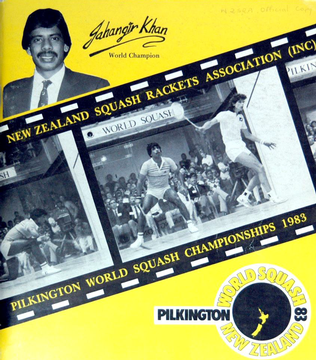 Rod will be remembered for his role as the Championship Director for the 1983 World Men's Championships held at Henderson and North Shore clubs.

Not only did it attract some of the super stars of the game it also attracted major sponsorship and daily television coverage which gave the profile of squash a major boost. The championship featured players such as Jahangir Khan, the eventual winner, Qamar Zaman, Chris Dittmar and New Zealand's Stu Davenport. Davenport went on to finish 3rd and Paul Viggers and Rod Hayes made the last 16.

The funeral will be held at Dils Funeral Services, 185 Schnapper Rock Road, Albany, at 10;30 am on Saturday 25th February.

The service will be followed by a private burial. In lieu of flowers donations to Hospice North Shore PO Box 331129, Takapuna 0740, would be very much appreciated.

Our thoughts and the thoughts of the squash community are with his family at this time.