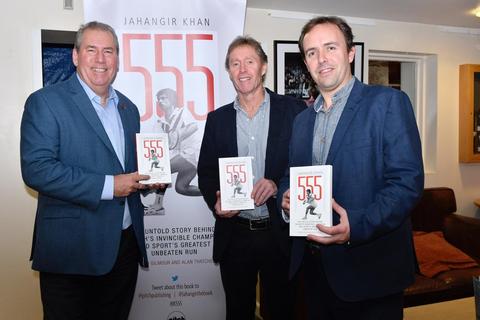 Ross Norman celebrated the 30th anniversary of his epic victory over Jahangir Khan by helping to launch a new book about the man whose long unbeaten run he ended.

New Zealander Norman claimed that Jahangir “moved the game forward by at least 20 per cent” during the 1980s.

The launch of Jahangir Khan: 555 took place at Wimbledon Racquets and Fitness Club in south-west London.

Jahangir’s elder brother Torsam, who died aged 28 after suffering a heart attack on court in Australia in 1979, had been the resident professional at the club.

Jahangir Khan became the greatest player in the history of squash, recording 10 consecutive British Open titles, but, for a large part of his dominant spell, he had Norman snapping at his heels.

Despite seriously damaging his knee in a parachuting accident, Norman returned to squash determined to beat Jahangir. He said: “To be able to get anywhere near Jahangir, I had to work extremely hard on my fitness. Despite warnings from the specialists, I got back on court as soon as I could after the knee operation.

“I gradually worked my way back up the rankings and within two years I was at number two in the world. Despite losing 30 matches in a row to Jahangir, at least 20 of them were in major finals all over the world and there were times when I knew I was getting closer to him.”

Then came that fateful day in Toulouse, France, when Norman met Khan in the final of the 1986 World Open. Both had overcome Australian opponents in the semi-finals, Khan beating Chris Dittmar 9-1 in the fourth and Norman achieving a similar result against Chris Robertson, racing through the fourth 9-2.

Then came the final and Norman produced the performance of his life as his combination of hard, fast attacking squash produced the rare sight of Jahangir struggling to get the ball back.

As Norman powered his way to victory, with an emphatic 9-5, 9-7, 7-9, 9-1 scoreline, he admitted to playing mind games with himself to avoid blowing his big opportunity.

He revealed: “When I got to 7-1 and 8-1 in the fourth game I pretended that I had one point less, just so that I could concentrate on the job in hand and carry on playing the way I had to get to that point. My biggest fear was choking.”

When asked at what point in the match did he feel like that he was capable of achieving a famous victory, he replied: “I took each game one at a time. My target when I went on court was to win at least one game. Jahangir was such an amazing player that you knew the brutal likelihood was that you would lose, but in every match I played I wanted to earn a measure of the respect that he enjoyed.

“Each time I played him I wanted him to feel that he had had to work hard to beat me. Some players probably accepted the inevitable and maybe didn’t leave everything on the court when they played him, but that was never my approach.

“After the first game I felt ‘Well, it’s not going to be a three-love’ which was his usual scoreline against most players. Then I reassessed and went out to do the same in the second game.

“That was pretty close but after I had won that my brother David came down to my corner and said ‘You have just made history’ because nobody had taken him to five for a long time.

“The third game was also close and from seven-all Jahangir nicked the last two points. It was in my mind that I had been two points away from ending his unbeaten run and winning the World Open at the same time.

“I wasn’t downhearted at all after that third game. I just went back on court to refocus and was determined to do my best again. It was at this time that I sensed that he was feeling tired. I looked across at him a couple of times and could see that he was struggling a bit.

“Then, when the match was over, all the squash journalists had to hastily rewrite all their reports. It was a Monday night and the London-based guys had early deadlines.

“They had pretty much written the story in advance that Jahangir would win another title and all they had to do was fill in the scores. I’d never seen them move so quickly.”

Asked about his favourite memories of that day, Norman added: “I can remember everything about that day with absolute clarity, from waking up in the morning, going for breakfast, having a practice hit, and then getting ready for the match.

“The venue in Toulouse, the Palais des Sport, was perfect for the see-through court. There were close to 3,000 spectators all around the court and they certainly made a lot of noise when they sensed something special was about to happen.”

Norman was delighted to have helped Rod Gilmour and myself research material for the book. 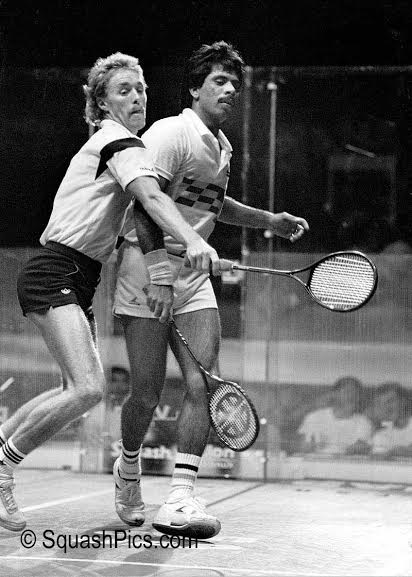 He said: “This was an amazing, transformational era for the sport. The rackets were getting bigger, we moved from the old plaster courts on to Perspex and then all-glass courts, there were experiments with the scoring, and then the tin was lowered.

“All of these elements helped the sport to grow and finally the technology has caught up with the speed of the game and squash now comes across brilliantly on television.

“All that’s left at the top level is to get squash into the Olympics. That would be a huge thing for the game in terms of recognition and potential funding.

“It would also be a deserved reward for all the top players who absolutely deserve to share that Olympic platform with athletes from all the other sports.

“Without delving into the politics, just think how amazing it would be for countries like Pakistan, Egypt and Malaysia (and New Zealand) to be winning gold medals.”

Norman felt that Jahangir Khan had a massive impact on the sport during the 1980s, not only in terms of the record books but also in changing the way the game was played.

“He lifted the level of squash by 15 to 20 per cent, which is unusual. Roger Federer did the same for tennis, but maybe by five or ten per cent.

“Jahangir was fitter than anyone else, he played a brutal kind of high-paced games that most opponents simply couldn’t cope with, and the book is a massive tribute to the guy.

“It has been a pleasure sharing a lot of the great memories from those days.”

Norman is planning a reunion with Jahangir Khan during the forthcoming London Open at the Cumberland Club before JK heads to Manchester for the British Grand Prix.

Jahangir’s cousin, Zubair Khan, joined Norman at the book launch at Wimbledon and spoke movingly of the great man.

Zubair, who is head coach at the Cumberland Club, said: “We trained together maybe 100 times. I was much younger and learned so much from him. Sometimes I would join a long list of training partners, including guys like Hiddy Jahan, and even though we were cousins he showed no mercy on court.

“He never smiled at me once inside the court. He was there to work, to be the best. And you can learn so much from that kind of discipline.

“I am hoping Jahangir will visit the Cumberland Club during the London Open in two weeks’ time. That would be a very special occasion to get the family together.”

“It will be great to see him again but I’m not sure if we will be getting back on court,” added Norman.

Jahangir Khan: 555 (The Untold Story Behind Squash’s Invincible Champion And Sport’s Greatest Unbeaten Run) is published by Pitch Publishing. It is available for purchase online at Amazon Books 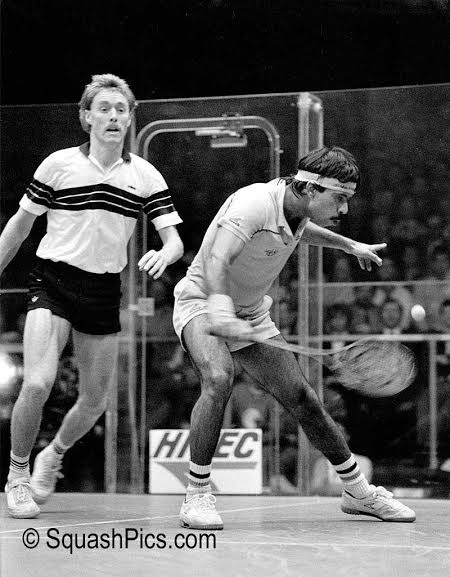