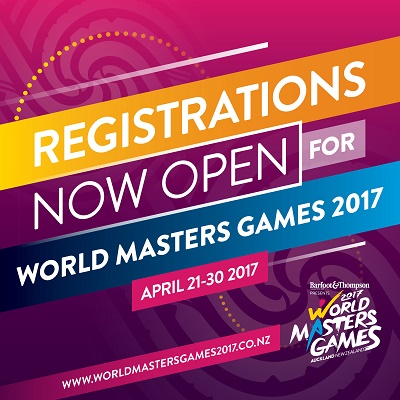 Registrations have now opened for next year’s World Masters Games 2017 with squash being one of the 28 sports on offer.

Jim O'Grady, Chief Executive of Squash New Zealand says with 25,000 athletes expected from more than 100 countries, the event offers a rare opportunity to compete on a world stage and celebrate sport in a festival-like setting.

“More than 12,000 international competitors are expected to travel to New Zealand for the occasion, with half coming from Australia. We’d like to ensure visiting squash competitors get a warm welcome but also feel the strength of our competitive spirit!” Jim O'Grady says.

As part of the public launch of registration, World Masters Games 2017 announced the first 10 competitors of the Games, being a blend of elite and social competitors, collectively representing the diversity of the Games. The first 10 were:

As with all other World Masters Games, there is generally no need to qualify or be selected to compete. As long as you are over the minimum age, and in the case of para-sport meet the minimum disability classification requirements, you can take part. Competitors represent themselves, not their country, and compete in their own age group.

Registrations for the Games close 31 January, 2017. There are two reasons to sign up now. Places in some sports are limited, meaning registrations could close early if places full up. In addition, anyone who registers between now and 31 March 2016 is automatically inducted into the WMG2017 HALL OF FAME offering special benefits such as a limited edition PIN, and merchandise discounts.

Information about the Games, the sports, pricing and payment options can be found at: www.worldmastersgames2017.co.nz