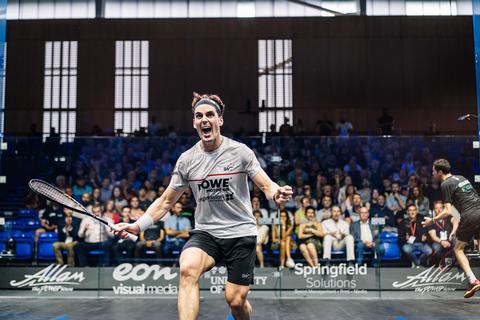 The competition format for November’s Nations Cup Squash tournament in New Zealand has been revealed, with a new best-of-seven games scoring format being used throughout the four-day event.

Each game will be first to seven points. If the game scores are locked at 6-6, a sudden-death point will be played, with the winner of that rally taking the game. Each player can opt for a 'Power Play' twice per match where he or she can win two points.

The Nations Cup - is the inaugural event in the new SquashFORWARD series, which will make its debut during the 2022-23 season. The SquashFORWARD series has been created in order to trial changes to the traditional competition and scoring formats used at official tournaments, including those on the PSA Tour.

The event will feature eight nations, with two players (one male and one female) from each country competing. Those nations will be split into two groups of four, with the top teams from each group meeting in the final.

The new scoring format was decided following engagement with the squash community, with votes being cast on a series of proposed scoring formats during April-May on the PSA World Tour website.

“The role of the SquashFORWARD series on the calendar is to trial new formats and tournaments which can help create more excitement in the sport. We were pleased to involve the squash community in choosing the format for the Nations Cup and look forward to working together with Squash New Zealand to deliver a new experience to players, spectators and viewers.”

Squash New Zealand Chief Executive Martin Dowson said he was thrilled to have such a high standard of players coming to the country.

“New Zealand has a growing international reputation for innovation and to partner with the PSA with the new scoring format and use of powerplays will be fully embraced by the home crowd, we cannot wait until November!”

The Nations Cup - which will take place at the Trustpower Arena in Tauranga - will be broadcast live on SQUASHTV, as will the New Zealand Open, which features the Roberston Lodges NZ Men’s Open and the Barfoot & Thompson NZ Women’s Open. Both are PSA World Tour Silver events and will be played at the same venue between November 8-13.

Details regarding further events under the SquashFORWARD Series banner will be announced in due course.