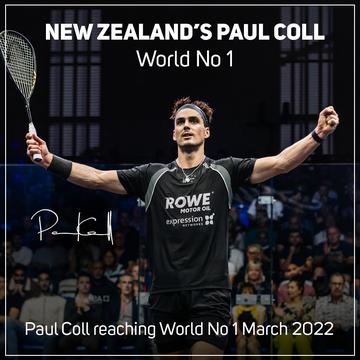 New Zealand squash player Paul Coll has been confirmed as the new men’s squash No 1 in the March PSA world rankings released this evening.

Coll moves from No 2 to the top ranking overtaking Ali Farag and ending the domination of Egyptian players at No 1 in the world.

It is the first time a New Zealand male has reached the pinnacle ranking in the sport. Previously Dame Susan Devoy, Leilani Rorani and Carol Owens were ranked women’s No 1.

Currently playing in the PSA Windy City Open in Chicago Coll, 29 from Greymouth was thrilled with the confirmation of the ranking.“I can’t really put in to words the feeling I have becoming world number one. It’s something that I’ve dreamed of this my whole career but it’s never really been with grabs until the last 10 months. It’s pretty surreal to be No 1,” he said “I’m super proud and I want to thank everyone who supported me on my journey from when I was a junior until now, massive thanks to everyone I couldn’t have done it without a lot of people. It’s been a long journey and I’m super excited and thanks everyone for the support.”

Coll is hoping to return to New Zealand at some stage later this year, after around three years away from the country due to travel restrictions and tournament play.

British Open winner, Coll has garnered plenty of kudos from his peers around the world including former world No 1 and the man who beat him in the Commonwealth Games on the Gold Coast four years ago, James Willstrop. The Englishman told the Squash Mad site “I’m happy for him (Coll) reaching No 1. He is a great champion for the sport and for New Zealand.

”Former New Zealand squash great Ross Norman is also in high praise of Coll. Norman has the last Kiwi male to be ranked No 2 in the world in the mid 80’s and believes Coll has much more to give to the sport.

“It’s fantastic to see a player such as Paul reach the top rankings after so much hard work on his behalf. What is even better is that he appears to be improving. He has a certain Kiwi attitude, well I like to think of it as a Kiwi attitude that he’s not flashy on courts, just hard working and willing to fight for the game and for his success,” said Norman.

“I never achieved what he has in getting to No 1, I came close, but couldn’t quite overtake Jahangir Khan. Paul making No 1 should be huge in New Zealand. It’s a big occasion,” said Norman.