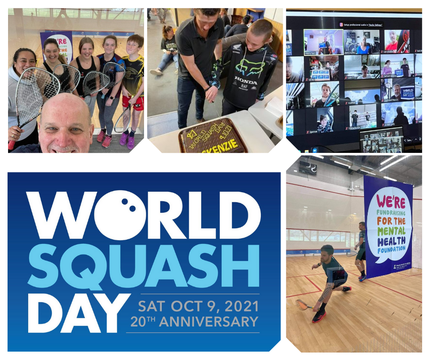 A wide range of squash fun ideas from one end of the country to the other saw the targeted $20,000 surpassed with the total still climbing.

This is despite clubs in Northland, Auckland and Waikato under Alert Level 3. Many clubs used World Squash Day as a way to connect with their members during difficult times and keep in touch online with different activities and challenges.

Other clubs around the country had squashathons and other challenges, while bake sales in places such as the Mackenzie Squash Club in the central South Island and Makarewa Squash Club in the deep south helped raised funds and bring their club together.

“We really appreciate the support and for using this big day in the squash community to encourage fundraising for us. We hope this will bring in some light to all squash clubs to keep the conversations around mental health going and bring the community together. The impact that clubs have on a community is huge and were happy to know that squash clubs are now equipped with the tools to support their own and others wellbeing,” said Safira Abdat from Mental Health Foundation NZ.

Squash New Zealand Chief Executive Martin Dowson was happy with clubs being able to see the big picture of how they can help with the mental health of people in their sport and the wider community.

“We are thrilled with this achievement noting the impact that our lockdowns has had on squash. We had three districts (Northland, Auckland and Waikato) who were unable to play on World Squash Day last Saturday and Auckland clubs have not been able to play since mid-August. We would like to thank Mental Health Foundation for all their messaging during a very challenging period, it has demonstrated the high value it add to our communities,” said Dowson.

The highest amount raised by an individual club is Putaruru Squash Cub in the Bay of Plenty with $2500, just ahead of Henderson Squash Club in Auckland although late donations from other clubs continue to flow in.