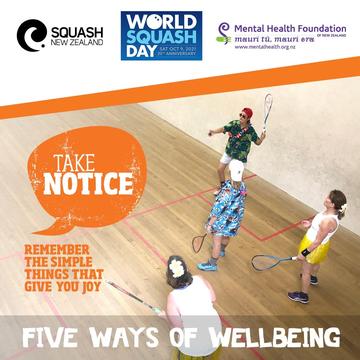 Squash is proving to be an ideal opportunity for everyone to keep fit, and social as well especially those who have excelled in other sports.

For instance there are a large number of ex All Blacks who use the sport for fun, fitness and networking. Some are more competitive than others.

Highlanders and Japan national coach, Tony Brown, loves squash to keep his mind fresh, keep fit and loves watching Paul Coll and Joelle King play around the world. He is a B grade player out of the Pirates Club in Dunedin who also loves beating other ex All Blacks.

“I know that Robbie Deans is very competitive the squash court and I’ve played him a few times. Justin Marshall is another one. Leon MacDonald as well. I’ve also played against again Paul Steinmetz a few times. There’s plenty of ex rugby players who take up squash at the end of their rugby careers and these days pretty competitively and play a pretty good game of squash,” says Brown who played 18 times for the All Blacks.

“Now that Leon has taken over the Blues I win the squash and he tends to win the rugby more often than not. We’re still competitive on squash court and rugby field,” he says.

Brown is right behind Squash New Zealand and World Squash Day, October 9 2021, especially with the Mental Health Foundation as one of the partners for the event.

“The mental health of athletes through to the general public is so important. It’s good to get behind a worthy cause which can help in the community.”

As part of World Squash Day 2021 clubs around the country are set to take part in activities with some nominated events including; ‘12’ hour squash marathons, opening up clubs to the community and other engagement events.

Each club will be supported by Squash NZ to gain the most for themselves and also for the Mental Health Foundation on World Squash Day which is celebrating its 20th anniversary this year.

Check out our leaderboard and to sponsor our clubs and the mental health foundation of NZ please head here https://events.mentalhealth.org.nz/event/squash-nz/

Thank you to everyone for supporting the Mental Health Foundation!