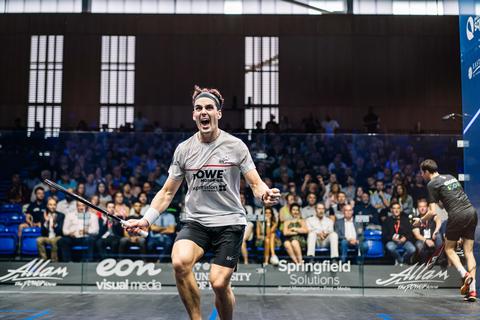 Coll defeated the new world No 1, Ali Farag in the final of the British Open to push his ranking up the extra spot. He is the only non-Egyptian player in the top seven men’s world rankings.

Later this month Coll will play the Egyptian Open in front of the Pyramids before two events in the United States, the Netsuite Open in San Francisco and the US Open in Philadelphia.

New Zealand champion, Evan Williams is the second ranked men’s player at 84 and keen to win the national title again at the end of October at his home club, Hutt City Squash.

The next three Kiwi men are Lwamba Chielshe at 102, younger brother Temwa at 116 and Joel Arscott at 159, all new career high rankings.

In the women’s rankings Joelle King continues her long run in the top 10 staying at No 8. Other Kiwi world rankings have Waikato’s Emma Millar at 103, Kaitlyn Watts from Manawatu at 125 followed by Abbie Palmer at 130 and Auckland teen Ella Lash at 180 rounding out the top five New Zealand women.