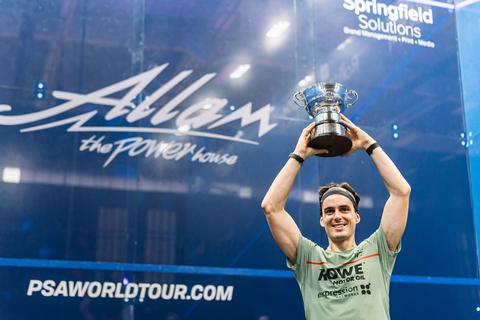 Coll, went into the final knowing not to fear the record books. In his semi-final victory over world No.1 Mohamed ElShorbagy, who had held a 9-1 record over Coll, however the Kiwi looked unplayable, requiring just 31 minutes to knock the defending champion off his perch.

In the final the West Coaster started slowly trying to find his length dropping the first game 6-11 and struggling to stay in the rallies.

Coll, however, may well be the player best suited to this type of game, such is his fitness. The world No.4 was content to trade long rallies with Farag, finally taking the match, and championship, with a well-deserved 11-8 victory.

“It’s been a long journey for myself. Coming right from juniors, I had to leave home at a young age. This moment right here makes it all worth it. To have my coach in the crowd, one of my really good friends, Lee, in the crowd, just makes it extra special to be able to do that.

My parents were supposed to be here, but due to Covid they can’t travel, so just super proud of this moment. I just want to thank everyone from New Zealand and everyone who’s helped me over my career to get to this stage. There’s too many people to single out, but thank you all. I love you all.

Thank you to the whole of New Zealand for getting up at two AM and watching. Thank you so much, everyone in the crowd who was here and came out to support, I just want to thank you all for everything that you’ve done for me,” said the 29-year-old after the match

“I was probably slightly different to everyone [else who won previous Opens]. I didn’t start my squash until a bit later. [If] I went through juniors with Ali, he probably would have bageled me 3-0, 11-0 in every set. But this is the pinnacle of squash, apart from the World Championships, so to get my first major title here, against a good friend, and one of the best players in the world means everything to me," said Coll who was the first New Zealand man in the final since Ross Norman was beaten by the great Jahangir Khan in the 1986 final.

“[Immediately after the match] I rang my girlfriend [fellow professional Nele Gilis] back in Amsterdam, she was crying. I rang my parents straight away, they were crying as well. There’s just too many people to thank for me. But I just want to thank everyone who’s helped me. My sponsors, everyone, they’ve become more friends and part of my team rather than just sponsors. This for everyone that’s come along that journey with me. I’m just super proud and super happy in this moment.”

There is potential for Coll to improve from his current fourth place to third when the new PSA rankings come out at the beginning of September.