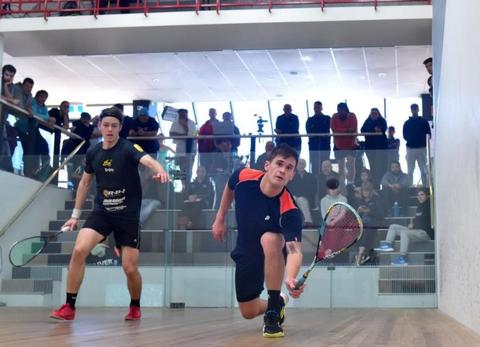 Excitement is building in New Zealand and Australian squash with the confirmed entry list for next week’s Barfoot & Thompson Auckland Open showcasing most of the best players from each country.

The tournament which is a PSA Challenger event with the biggest prizemoney and world ranking points so far this year in Australasia has a number of top competitors from over the Tasman taking part.

Australia’s two highest ranked men, Joseph White at a career-high 134 and Rhys Dowling at 140 in the world will be the second and third seeds at the tournament which runs Thursday 27 – Sunday 30 May at the North Shore Squash Club..

Dowling beat White in the 2020 Australian Open final, however their time on court this year has been limited compared to most of the Kiwi players who have been competing in a number of PSA events around New Zealand.

Dowling ,26 has been ranked in the top 100 and  is an experienced campaigner with two PSA Challenger titles to his credit. He could one of the biggest threats to top seed Evan Williams ranked at 86 in the world and the current New Zealand Champion.

Williams has won three PSA Challenger titles, Henderson, Waikato and Panmure this year and is also targeting the New Zealand Champs at his home club in Hutt Valley next month.

Fourth seed is Lwamba Chileshe ranked 145 who was a beaten finalist to Williams last week in Panmure, but won the Challenger title in Morrinsville earlier in the year defeating his brother and Auckland sixth seed, Temwa Chileshe in the final.

In the women’s draw the top two seeded players are Australian with Sarah Cardwell ranked 59th and Jessica Turnbull at 66 in the world heading the draw. Twenty-nine-year-old Cardwell was a member of the Australian Commonwealth Games team in 2018 at the Gold Coast and is the daughter of former world No.1 Vicki Cardwell who was a contemporary of Susan Devoy.

Turnbull has five PSA Challenger titles to her credit and like many of her fellow Australian players is desperate for tournament play.

Kiwis Emma Millar and Abbie Palmer at 97 and 117 respectively are the third and fourth seeds while twenty-year-old Australian Alex Haydon at 146 is the fifth seed and Kiwi Kaitlyn Watts the sixth seed ranked 234.

Watts, 20 from Palmerston North is the current form player in New Zealand having won three consecutive PSA Challenger titles, all of them beating Millar in the final.

The men’s draw is a 24-player field and women’s 16. The tournament will be shown on Sky Sport Next youtube as well as the later stages live on Sky Sport Pop-up.