Kerikeri Squash Club So Close, But So Far Away After Arson 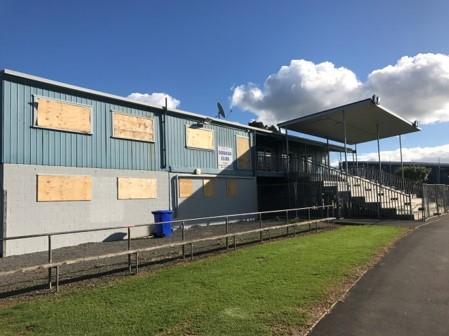 It’s been four and a half long years since squash in Northland suffered its greatest loss, when the Kerikeri  Squash Club had its facility extensively damaged beyond repair by arson. Now the club is close to building something new which they can be proud of, but there’s a funding shortfall.

The time without a club has mean a lot of travelling for players, young and old in the region with the nearest official clubs either at Kamo in Whangarei or Kaitaia. Both an hour’s drive or more and a real limit to enthusiasts of squash.

The Kerikeri Squash Club and committee members have over the past few years been fundraising and involved in a large number of meetings with funding organisations and planners. The club now has enough money for the construction of a two-court facility, but with the population of Kerikeri growing at a steady rate and its geographic location it means the mid-Northland area is lacking in facilities and will need updating within a short time-period.

The club feels that a four-court facility is a more realistic option for the area and will help grow the game.

The new, agreed location for the club is part of the Kerikeri Sports Hub next to the netball courts and rugby club and cooperation is already underway between the different sports to share facilities, car parking and memberships.

The big issue is the last part of the funding puzzle. Of the around $1.2million required, there’s a current shortfall of about $300,000 to get things over the line, something Kerikeri Squash Club President, David Collins says is difficult in a growing community stretched a little as it becomes a bigger hub in the region.

There’s a sense of irony in Collins position. “I’m a club president without a club,” he said. “We’re a growing area and so far feel we’ve exhausted the avenues we can for funding. We’ve had some great help from council, they’ve agreed to allocate $700,000 of the insurance funds to the project but it’s the last amount to get things signed off. We want to have all funding sorted before any construction takes place. We need help with the shortfall.”

“The nearest active club is Kamo in the south which is an hour away. There’s a couple of courts in Kaikohe at the golf club, but they need extensive work. Aside from the more mature players it’s the kids in the region who are missing out on a sporting opportunity.”

Backed by Squash New Zealand and Squash Northland the plan for the four-court club has been submitted for both building and resource consent and  is in the later stages of this process..

Squash Northland President, Karen Dykzeul is hopeful the facility can be built and the area can once again become strong and provide for all squash enthusiasts.

“Kerikeri was the second largest club after Whangarei in the Northland region. It is so important to have courts in the area. It’s not only a vital link between Whangarei and Kaitaia, but also a growing area in population as well. Lots of other sports people use squash for cross training and fitness in the off season. Squash Northland is right behind the project and although we aren’t a rich sport in terms of finance, we’ are keen to do what we can to help get this project across the line.”

“Northland is a large region which has plenty of history and many top players. We’re keen to assist where we can and provide backing with any funding applications,” said Dowson. “It would be great to have a facility of this type in Kerikeri, I know it would be beneficial for the community and create a legacy for the sport for the future.”

Kerikeri Squash Club has a givealittle page and is looking for those who want to get behind having a facility the area can be proud of again.