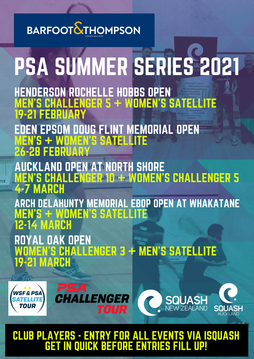 Squash Auckland and Squash NZ are proud to announce that the Barfoot & Thompson PSA Summer Series will be back for a second season in 2021.  The series had a successful debut earlier this year with capacity tournaments hosted at the Henderson Squash Club, Eden Epsom Tennis & Squash Club, North Shore Squash Club, and Royal Oak Racquets Club.  The same clubs will again have hosting duties, each holding an Open tournament which will have various levels of PSA (Professional Squash Association) status attracting top players from around the country to compete for lucrative world ranking points.

As an added bonus for some of the 2021 events, the PSA has recently offered national federations an opportunity to run a limited number of Challenger events with a 50% reduction to the prize money in an effort to encourage more tournaments to take place and provide valuable playing and earning opportunities for players.  The Barfoot & Thompson Auckland Open will be one such event, being elevated to Challenger 10 status for the Men and to a Challenger 5 for the Women, with a total of US$9k prize money up for grabs.  North Shore retain hosting rights for the Auckland Open which will be held from 4-7 March.

Promoting the club tournaments to PSA status provides more opportunities for the country’s top up and coming players to earn valuable PSA world ranking points without having the expense of needing to travel overseas, while generating additional interest for local players and members.  Over 550 players competed across the four 2020 tournaments with all four tournaments needing to close entries early due to reaching maximum capacity, however Royal Oak will be looking forward to getting in on the action after their Open was abandoned after the first days’ play due to the COVID lockdown in late March.  While the 2021 events will unlikely have the same international flavour due to current COVID travel restrictions, there will be intense competition among the players with increased prizemoney and world ranking points on offer, as well as spots in the New Zealand team for the Men’s World Teams Champs up for grabs which is due to be held in Tauranga from 13-19 December.

As with regular club tournaments, local players of all grades will have the opportunity to enter the tournaments and play alongside the pros.

Squash Auckland General Manager John Fletcher is excited to see the series return in 2021 and to have Barfoot & Thompson back as major sponsor for the Auckland Open. “When we developed the series back in 2019 it was an audacious plan to improve opportunities for both our top level players as well as our local club players.  To see that come together so successfully in 2020 on the back of a lot of hard work from the host clubs was very satisfying, and we’re incredibly grateful to have the support of Barfoot & Thompson and a number of their branches to allow these events to happen in the first place.  We’ve learnt a lot from the tournaments this year and look forward to working with Squash NZ and the host clubs to create even better events in 2021”.

Current New Zealand #1 and world #4 Paul Coll, now based in the Netherlands, is excited by the opportunities being created back home for players striving to kick start their careers as they aim to achieve the same success he and fellow world top ten player Joelle King have to date. “It’s fantastic to see the growth in the number of PSA events for players the last few years, which is allowing our top young players the chance to give becoming a professional squash player a good crack.  It’s incredibly tough starting out and takes a large amount of personal sacrifice to commit to becoming a professional player, so seeing the support of Squash NZ, the districts, clubs, and sponsors to help these players, along with running great events for local players to also get involved with is awesome for our players and the sport”

As well as the PSA Summer Series tournaments, a number of other Auckland clubs will be hosting PSA Satellite events during the season including Panmure and Browns Bay in May, and Howick in July.