Emma Millar has her eyes on the Mitchell Rosebowl 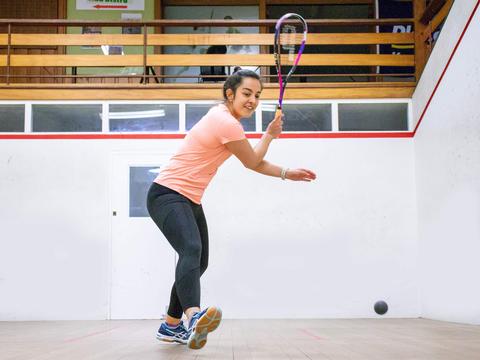 The New Zealand Squash Nationals are traditionally held in the middle of the winter months and have top 10 ranked Paul Coll and Joelle King adding to their current total of five and eight titles respectively.

But then 2020 hasn’t been a ‘traditional’ year. The nationals which start tomorrow and run until Sunday afternoon at the North Shore Squash Club are on their third dates after postponement twice already.

For women’s top seed, Emma Millar it’s been an eventful year. Even with a significant break in play as a result of Covid-19. The Waikato player, was still very busy. Initially she competed in a couple of PSA Satellite tournaments around the North Island before the pandemic struck. But that was back in February.

She’s also been teaching at St Pius school in Hamilton and has a school production coming up shortly, add in coaching the nationals girls development and district squads, plus having her appendix removed it’s remarkable she’s feeling fit and ready for the nationals tournament.

Twenty-nine-year-old Millar ranked at 112 in the world (career high of 86) is targeting her first title after a player such as King has dominated the event for so long, winning the past three years and five times prior to that.

“It’s going to be an exciting tournament, particularly between myself, Abbie (Palmer) and Lana (Harrision). We are all very even. It’s going to be hard fought,” said Millar who has had a best result of third at the nationals in the past.

“Having Joelle away opens up a lot of opportunity for players like myself. It would be great to have her here, and in some ways it’s a hollow victory,  but you just have to take the draw you’re given. In other ways it will still be nice to have a new name on the honours board.”

Just over a week ago Millar won a Satellite tournament at the Panmure Squash Club in Auckland beating former top 100 ranked Harrison on four games in the final and considers it a mixed blessing.

“You have to take the bit of confidence, but it doesn’t mean too much as we are always having close results between the three of us.”

“We’re all familiar with the courts and have played PSA tournaments and other events at the venue. It’s not an unfamiliar club. It will be warm which isn’t normal for nationals. Usually we have nationals in winter and we don’t have these sort of conditions,” said Millar.

In the absence of Coll the men’s top seed is Wellington’s world No.87, Evan Williams who has been a beaten finalist at the tournament twice. Second seed is world No.144 Lwamba Chileshe (Waikato) followed by over a dozen other players in the men’s tournament who have PSA world rankings and are considered contenders for the title.

The tournament starts on Friday 30 October with first round matches from midday and second round from 4pm, including a potential round of 16 clash between national junior champ Elijah Thomas and Joel Arscott, both players are ranked inside the top 250 in the world. Saturday runs from 10am until around 8pm while the women’s final is scheduled for a 2.20pm start on Sunday followed by the men’s final.