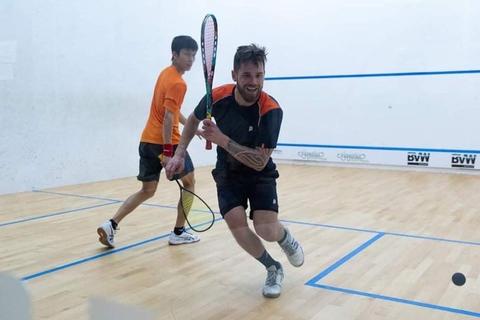 The 2020 New Zealand National Squash Championships are set to be the most open for a number of years as a result Paul Coll and Joelle King not being able to return home to compete due to Covid-19 restrictions and travel difficulties.

That doesn’t make the tournament weaker, in fact it’s the strongest for some time with so many players looking to take the coveted title.

After two previous delayed dates the tournament will finally get underway next Friday at the North Shore Squash Club with full 32-player draws in both the men’s and women’s competition.

At the top of the men’s draw is 87th-ranked Evan Williams from Wellington. The 2018 Commonwealth Games team member has been a beaten finalist at the tournament on two occasions and is dead keen to take the title this time

“It’s the most open nationals for I’d imagine seven or eight years. Everybody thinks they can win,” says the experienced 31-year-old who has been ranked as high as 79 in the world.

“I was a beaten finalist in 2010 and 2018. I beat Martin Knight when he was 30 odd in the world and then lost to Campbell Grayson in the final in Whakatane in 2010. The second time was a couple of years ago and losing to Paul Coll in Henderson.”

Williams won’t have things his own way in the quest for the win. There is a group of around 10 players who are in the mix to challenge for the semifinals and finals with 16 out of the 32 player draw having current PSA world rankings.

“The younger guys have to beat each other, then either myself or Lwamba (Chileshe). Being the top two seeds gives us an obvious advantage. It’s all on the young guys. They have to win big and back it up. It’s a good sign that we have good quarter-final match-ups. Even some second round clashes are good too.”

Recently Williams, who has a full coaching schedule in Wellington was beaten in the final of the Panmure satellite tournament by second seed Lwamba Chileshe who has a world ranking of 144, but it’s not something Williams is overly concerned about.

“The Panmure tournament strengthened my preparation for the nationals.  Lui played well. Now he knows he has to back it upon the bigger stage. The nationals mean a lot to everyone. Even if there was no prizemoney, it’s not what we are playing for. It’s the title and prestige that is our aim.”

One of the few left handers in men’s squash at a high level, Williams can’t quite figure out why they are so rare around New Zealand.

“It’s strange, there’s no real reason. We have a slight advantage on the court and we’re unfamiliar for opponents too. There’s just little things we do differently which can be to our advantage.”

Williams likely opponent in the quarters should be either eighth seed Elijah Thomas or ninth seed Joel Arscott, both players are ranked inside the top 250 in the world while there are two other Commonwealth Games team members, Zac Millar and Lance Beddoes who add experience to the draw.

Top seeds in the women’s draw are Emma Millar  from the Waikato who is ranked 112 in the world with Abbie Palmer (Auckland) just once place behind her.

World No 8 King is the defending champion from the past three years in the women’s draw and a winner five times prior to that. Coll has won the men’s title the last five consecutive years.

The tournament starts on October 30, running until November 1 at the North Shore Squash Club in Takapuna. First round play begins 12pm on the Friday, with the finals from 2pm on Sunday.