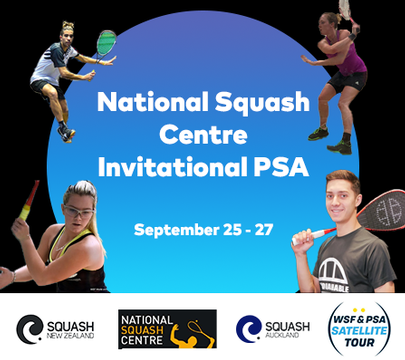 New Zealand squash players looking for some top level play will be hitting the courts this weekend in a PSA Satellite at the National Squash Centre Invitational PSA.

The tournament contains prizemoney and carries PSA ranking points and is an ideal warm up for some players in the Junior Nationals in Christchurch early next month as well as the Senior Nationals at the beginning of November.

The top seed in the men’s draw is New Zealand No.3 and world No.148 Lwamba Chileshe who was a member of the Kiwi team which finished fifth at the world champs late last year.

Auckland’s Abbie Palmer ranked 113th in the women’s PSA rankings is women’s top seed, just a couple of places ahead of Emma Millar from the Waikato.

The men’s draw features all eight players with PSA rankings. Sion Wiggin is second seed followed by Joel Arscott, Elijah Thomas all from Auckland and ranked within the top 300 in the world. There’s also Katikati’s Glenn Templton the national junior champ, Temwa Chileshe from the Waikato, Henderson’s Leo Fatialofa and Bay of Plenty’s Joe Smythe.

The six remaining women in the draw include Lana Harrison from Auckland who was a former top 100 ranked player, Katie Templeton and Lauren Clarke from Bay of Plenty plus top juniors, Natalie Sayes (Remuera) as well as Ella Lash and Ashlee Pepper from the Belmont Club on the North Shore.

Play starts on Friday from 5.30pm for men’s matches with women’s contests starting at 10am, Saturday. .

Spectators are welcome under Level 2 guidelines.