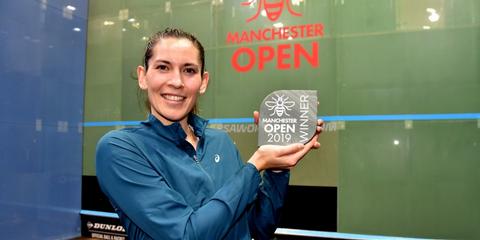 International squash and the PSA tour hits the court this week for the first time since March with the Manchester Open featuring defending women’s champion, Kiwi, Joelle King plus countryman, Paul Coll in the men’s draw.

Coll is ranked fifth in the world in an exceptionally strong draw which should see him face world No.1 Mohammed El Shorbagy from Egypt in the quarter-finals while King is drawn to play top seed and world No.3 Camille Serme (France) if she progresses to the last eight.

King ranked eighth in the world won the event last year over Tesni Evans of Wales in straight games. The 31-year-old from the Waikato faces Ineta Mackevica from Latvia ranked 59th  in the first round of play at 5.30am Thursday morning NZT, (vision available on Squash TV or Squash NZ facebook).

In the three tournaments Coll played earlier in 2020 prior to Covid-19 shutdown he was a beaten finalist twice and quarters once (to the then world No.1).

The Manchester Open was originally scheduled for May this year and will be held behind closed doors following strict Covid-19 protocols for the health and safety of all involved. Players have had to take a number of Covid tests to ensure their participation.

The tournament runs from September 17-23 (NZT).