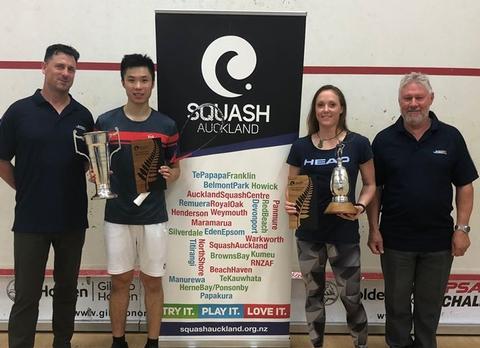 After a remarkable comeback victory in his semifinal, Wellington squash player Evan Williams couldn’t continue his winning run in the final of the Barfoot & Thompson Auckland Squash Open at the North Shore Squash Club.

Williams, 30, had a scored a comeback from two sets and 1-7 down to win his semifinal over Tang Ming Hong (Hong Kong) but was beaten in straight games by Leung 11-2, 11-8, 1-4 for the PSA Challenger title at the North Shore Squash Club.   The tournament second seed and New Zealand’s third ranked men’s player wasn’t allowed by his Hong Kong opponent and tournament top seed Henry Leung to get into the match, with Leung controlling the court and not giving Williams any free points making him work hard in every rally in front of the large crowd.

For Leung, ranked 87th in the world it was his fifth Challenger career title and a reversal from the previous time they played in Invercargill last year where Williams who is currently ranked 89th had won his sixth title beating Leung in the final.

Williams is now preparing for three Challenger tournaments in the United States in the next month which should improve his world ranking.

The women’s final became a reversal of the previous week’s tournament where second seed Emma Millar from the Waikato had beaten Auckland’s Lana Harrison in the Eden Epsom final.  This time it was hard-hitting Harrison who came away the winner in the PSA Satellite draw 11-7, 8-11, 11-8, 4-11, 11-6.

Harrison retrieved a large number of balls to put pressure on Millar at vital times to seal the win with a sequence of results featuring a semifinal finish, followed by runners-up result and then a win at the Auckland Open. Millar in her two tournaments has had a win and a finals finish.

It’s been a long time since Harrison’s name was on the women’s trophy when she last claimed the Auckland Open title in 2008.

The Men’s PSA Challenger 5 event attracted a strong draw of international entries to Auckland, with players coming from Hong Kong, Korea, Malaysia, Australia, and around New Zealand to compete for the NZ$10k prize pool.

The next tournament of the five-event PSA Summer Series is in Whakatane this week followed by Royal Oak the next week.

The tournament also featured a number of divisions for local players, with a total of 170 players competing over the four days of competition at the picturesque North Shore Squash Club.