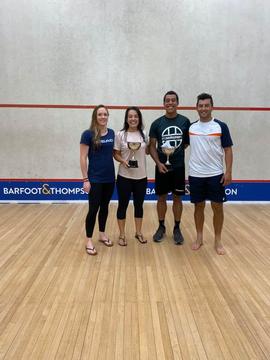 The Barfoot and Thompson Summer Squash Series is bringing out some of the best in the sport from New Zealand and beyond.

In the two events so far there have now been four different title winners.

The latest event, the Doug Flint Memorial Open at the Eden Epsom Club had the Millar family coming close to securing both titles, but not quite getting there in the end.

Millar has a current PSA ranking of 142 and is seeded second at the Auckland Open later this week while Harrison will once again be unseeded.

In the men’s final it was Temwa Chileshe who has been in good form of late after winning the Red Beach Open who came away with the title.