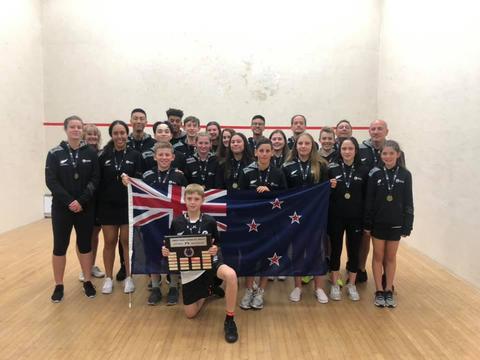 The series, which has been dominated by New Zealand in recent years is being held at the Carrara Squash Centre in Broadbeach, Gold Coast which will also be hosting the world junior champs later in the year. The team will take part in the Trans-Tasman test series 14-15 April with all team members also playing in the Oceania Junior Champs 10-13 April at the same venue.

The northern most player is Riley-Jack Vette Blomquist from the Manaia Club in Whangarei while Ashton Hansen in the under 13 boys is from Gore Town and Country Squash Club in Southland. There are players from Marlborough, Wellington, Bay of Plenty, Waikato and Auckland.

The Eden Epsom club in Auckland has brothers Elijah Thomas (under 19’s) and Noah Thomas in the under 15 boys, while the Belmont club on Auckland’s North Shore has three girls; Ella Lash in the under 15’s as well as under 13 players, Justine Pausch and Zoe Lepper.

Elijah Thomas and Glenn Templeton already have PSA world rankings and plenty of experience to call on and are both playing in the Auckland Open PSA Challenger this week. They’re joined in the under 19 boys by Campbell Webster from Hutt City who new to the teams event and Vette-Blomquist who continues his rapid development.

Waikato professional Emma Millar will make her debut as a New Zealand team coach leading the girls team, while Nick Mita from Wellington is the boys coach.

After the trans-Tasman tournament players will then compete in the AON New Zealand Junior Open in Tauranga, April 24-26.