A great draw has been confirmed for the men’s Barfoot and Thompson Auckland Squash Open with three players ranked within the top 100 in the world and five different nationalities taking part. 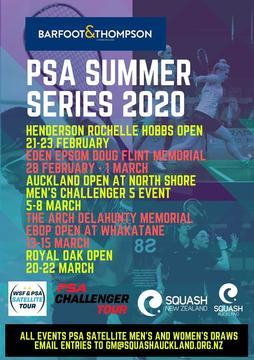 The tournament to be held at the North Shore Squash Club 5-8 March is worth US$6,000 for the men’s tournament and a women’s Satellite will also be played at the same time.

Top seed is Henry Leung from Hong Kong at 76 in the world, while New Zealand Commonwealth Games player, Evan Williams from Wellington will be second seed with his current ranking of 91.

The third and fourth seeds are also from Hong Kong in the form of players, Chi Him Wong and Tang Ming Hong.

There are some interesting first round matches including juniors, Leo Fatialofa against Elijah Thomas, Temwa Chileshe facing Anthony Lepper, Sion Wiggin playing Chris van der Salm as well as Glenn Templeton the national junior champ taking on Joel Arscott. The winner of this last match plays Williams in the second round.

The tournament is an ideal way for professionals to improve their ranking, or for younger players to get a kick start on the PSA tour and is also a New Zealand Junior selection event.

The Barfoot and Thompson Auckland Open is part of a five tournament series promoting the sport with events around the upper North Island. Tournaments are being held at the Henderson Squash Club, Eden Epsom Tennis & Squash Club, Auckland Open at the North Shore Squash Club, Whakatane Squash Club and the Royal Oak Racquets Club. All tournaments will be live streamed via Facebook. Further Satellite events are already being planned.