The New Zealand men’s squash team has secured their best finish in 20 years with a 5th placing at the world championships in Washington DC today. 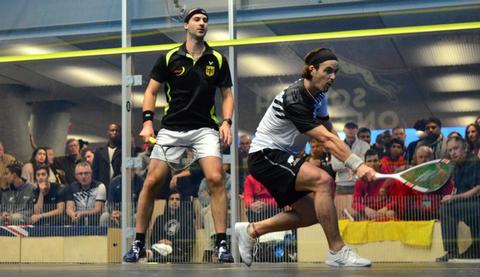 After the disappointment of losing their Pool match to Scotland which knocked them out of a semfinals place they then rattled off wins in their following contests including a win over Australia, Spain and finally Germany.

The triumph over Germany in the battle for fifth and sixth started well as Kiwi No.3 Evan Williams from Wellington easily dispatched Germany’s Valentin Rapp 11-1, 11-7, 11-8 in 42 minutes with an efficient display of squash.

Then in a match which was always going to be a battle, Paul Coll ranked 5th in the world took on Simon Rosner, the 6th ranked player.

For Coll the victory and playing for New Zealand means a lot. It was also the second consecutive time he has gone unbeaten at the championships.

“I actually managed to do it last time in France as well. I love playing for my country and seem to push to another level. I was really pleased to secure the win today. It was a tough match with a few momentum swings in there, but Glen (Wilson, team coach) was really good today and he gave me a good game plan to work and we actually changed it half way through today as it wasn’t working.

I’m really proud of the whole team and how we finish as it’s really tough on the last day,” said Coll who will remain in the Northern Hemisphere before his next PSA tournament which is in New York at Grand Central Station and then Chicago.

“We did have a goal of the semis and fell just short of that. It’s never easy to bounce back from a loss. We were all gutted after that loss in Pool play. We kept our heads up and had a solid couple of wins in the last few days and had our highest finish in 20 years.”

The victory over Germany meant New Zealand finished one place higher than the world champs two years ago in France.

New Zealand will hos tthe next men's world teams event, in 2021 in Tauragna.