On the back of Paul Coll’s great result reaching the world squash championships final recently and being ranked No.5 in the world, as well as players such as Campbell Grayson and Lwamba Chileshe at career high rankings, a series of professional squash tournaments is being launched for the summer of 2020. 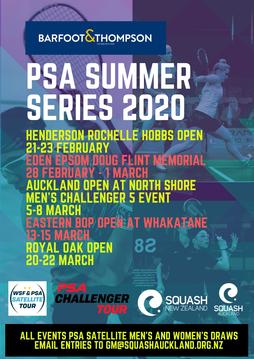 The Barfoot & Thompson PSA Summer Series has the backing of Coll who says it’s a great way for players to improve and hopefully move on to bigger and better things.

“Having moved through the ranks myself I know the incredible amount of dedication and commitment it takes to become successful in a sport that often struggles for financial support in our country and these events will be a huge boost for squash as a whole,” said Coll.

It is an exciting time for the future of squash in New Zealand and I hope to see many of the players enjoy the type of success I have had in my career to date.  Having access to these types of tournaments can only help them achieve those goals.”

Currently there are 18 Kiwi men with PSA world rankings and 11 women which adds to the competitiveness between the players at a local level.

The series is a Squash NZ initiative collaborating with Squash Auckland, SquashXLPRO and a number of clubs with the idea to help players earn ranking points to kick start their careers on the PSA professional tour and provide tough competition.

“Having a series of tournaments like this is great to keep up the momentum of the sport on the back of such great achievements from Paul Coll and other top players. Even New Zealand No.4 Lwamba Chileshe was playing these sorts of events in the past year and is now ranked 158 in the world. Also, Japanese player Ryo Kobayashi won the Auckland Open in 2019 and now has a world ranking of 97. A player such as Lana Harrison will also benefit from these sort of tournaments as she restarts her career and targets a top 100 ranking again.

The clubs are enthusiastic and so are the players. It’s something we need to do to give our players, officials, and clubs enthusiasm to keep the sport going forward,” said Squash Auckland General Manager, John Fletcher. “Having Barfoot & Thompson come on board is a great bonus for the sport and great to have a company which supports local sport.”

Tournaments for the Barfoot & Thompson PSA Summer Series are;

Further Satellite events are already in the works with more series to come throughout 2020. Keep an eye on our website for the next series launch!