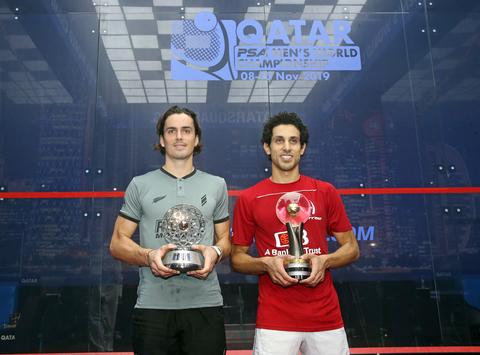 Momen was appearing in back-to-back World Championship finals after falling to world No.1 Ali Farag in the previous tournament and displayed a masterclass of attacking squash saw him draw World No.5 Coll into the front of the court time and time again to power into a two-game lead.

Coll, who was the first male Kiwi since Ross Norman in 1986 to appear in a final, returned to court in the third game with strapping on his right quad as a brutal week which saw him spend almost an hour more on court than Momen throughout the tournament. The injury looked to take its toll late in the match.

There was no stopping Momen in the third game as he closed out the win by an 11-8, 11-3, 11-4 scoreline in 39 minutes to lift the biggest prize in men’s squash just two weeks to the day since his wife Raneem El Welily fell to World No.4 Nour El Sherbini in the final of the women’s World Championship.

“I want to congratulate Paul on such an event and an amazing achievement. He’s done so well making it this far. He had the better of our last finals appearances, I’m just glad I managed to get this one.

“It was such a strong match, I know he pushed himself hard during the event. Towards the end, I could see he was struggling a bit, but he kept pushing. I only realised this morning we were the only married couple to become World Champions. We are privileged to have achieved something, and I’m so happy we did it,” said Momen.

For Coll making the final was a great achievement, even though he wanted more.

“It was tough right from the world go. Tarek wasn’t missing and making me do a lot of work. It was taking its toll right from the first rally because he was playing so accurate right from the start. I’m a little bit disappointed on tonight, but credit to Tarek he really delivered on the big stage tonight….I’m very proud of reaching my first championship final.”

Despite the majority of the crowd being behind Momen, the Kiwi was still thrilled by the support he had received from Doha and New Zealand.

“Massive support from back home waking up in the early hours of the morning. I really felt it all week and love all you guys….thank you very much. Very proud of my country and if I can put them on the map in any way I’m very proud of it. And to bring the country back to a world stage…I’m very proud of that.”

Coll is entered in the Channel VAS tournament in England which he won to really kick start his career in 2016. The event starts on Tuesday, although his participation may be reliant on the recovery of his leg injury.