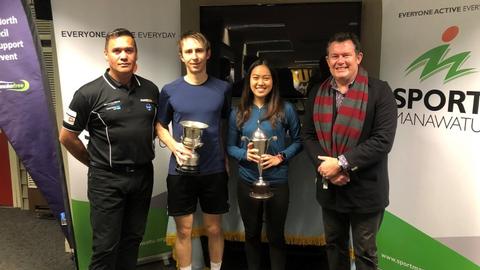 Two tough finals, but no titles for New Zealanders at the Inspirenet PSA Squash Classic Challenger tournaments at Palmerston North’s SquashGym over the weekend,

In the US$5,5000 women’s draw, Waikato’s Emma Millar did almost everything possible to win her final against top seed and world 90, Win Li Lai (Malaysia)

It was the first career title for the Malaysian and leaves Millar still aiming for her first PSA tournament title.

On her way to the final Millar aged 27 and ranked 135 had two good victories over Kiwi rivals with success over Abbie Palmer and Kaitlyn Watts.

In the men’s US$11,000 draw Kiwi No.3 Evan Williams once again showed his consistency to make his way through a draw, but found himself beaten for a title; his sixth final since the beginning of 2018.

On this occasion Williams, the tournament second seed ranked 104 in the world was defeated by top seed Rex Hedrick (Australia) with a ranking of 68.

Hedrick won the entertaining final in Palmerston North in 60 minutes 7-11, 11-6, 12-10, 11-7 with Williams, a member of the 2018 Commonwealth Games team coming incredibly close to taking the third game in particularly. However a couple of tight shots went the way of the Aussie at vital stages to help him win the game and then eventually take the match.   The next tournament is the ILT and Community Trust Southern Open 19-23 June US$11,000 men’s Challenger tournament.