First up loss for King 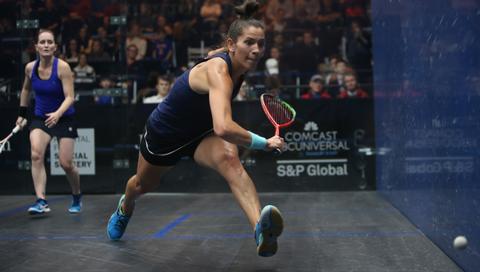 A difficult loss for Kiwi squash player, Joelle King in the first game of the PSA World Tour Finals in Cairo, Egypt.

King seeded fifth for the top-eight player tournament was defeated in 55 minutes by the fourth seed, Camille Serme from France in a match which had both players fighting for every shot.

The Waikato 30-year-old took the first game against Serme 14-12 in a game which took a staggering 20 minutes, however in the second it was the Frenchwoman who showed resolve to win 12-10.

In the best-of-three game tournament for Pool play the final game had a great start for the Kiwi who initially led 4-0. However Serme didn’t just gain one point back, she produced several deep shots to move ahead 5-4, then 6-4 before King even got a look in.

A let call in favour of the Kiwi followed by some more focussed play had King force her way back and then start stretching the lead until she eventually had a match point at 10-8. But it was not to be as Serme won three points in a row and then the winning point pushing King into the backhand corner and the error. The overall score 14-12, 10-12, 10-12 to Serme. King’s next Pool match will tomorrow (Tuesday) morning against feisty Welshwoman, Tesni Evans the eighth seed. Men’s tournament fifth seed, Paul Coll faces fourth seed Karim Abdel Gawad (Egypt) in his first match tomorrow morning at approximately 5.30am NZT. They are 2-2 in head-to-head contests.