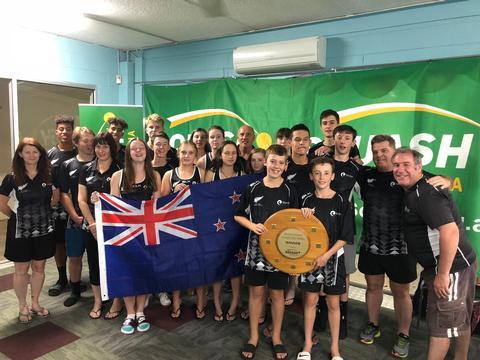 A strong group of New Zealand players has been selected for the Executive Travel trans-Tasman Junior squash series team’s event.

The players will compete in two test matches against Australia in the hopes of claiming the trans-Tasman title for a fifth year in a row.

The series will be held April 11th-12th at Remuera Rackets Club in Auckland and features some of the rising stars of the sport including Kaitlyn Watts from SquashGym Palmerston North.

A total of 18 players have been selected with two players each in boys and girls age groups under 13’s through to under 19’s.

At under 19 women’s level there are four players selected to provide preparation for the 2019 World Junior Women’s Championships team in Kuala Lumpur and to allow for increased international exposure and preparation.

They along with other team members competed at the world junior champs in India last year.

“The 2019 Executive Travel Trans-Tasman Test Series team are looking forward to continuing our sequence of victories over our rivals from across the ditch,” said Squash NZ High Performance manager, Shelley Kitchen.

“Our NZ junior representatives will be looking to engage their skills against Australia’s finest with a view to progress to future world junior teams and senior honours.”

Coaches for the New Zealand teams are Nick Mita (Wellington) for the boys and Phil Buscke (Waikato) the girls coach.

After the trans-Tasman series the 2019 Oceania Junior Championships are held at the same venue 13th-16th April.

The Oceania Junior Championships will feature players from Australia, New Caledonia, China, Hong Kong, Singapore and squash powerhouse nation, Malaysia. It is expected that around 200 players are expected to take part in the Oceania’s