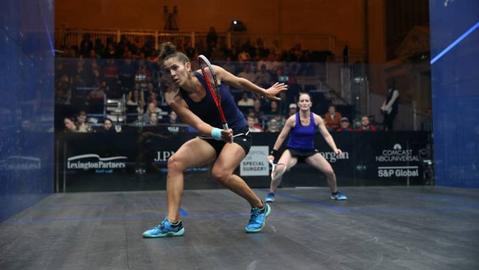 Amanda Landers-Murphy had a tough first round match in which she was beaten by England's Millie Tomlinson. Amanda plays in the Cleveland Classic which starts on Thursday.

Campbell Grayson made his way through to the second round where he was beaten by Indian world number 12, Saurav Ghosal. Campbell’s next tournament is the Three Rivers Capital Pittsburgh which runs from 6th – 10th February.

Joelle King and Paul Coll both had byes and then won their second and third round matches playing against Nicol David and Saurav Ghosal respectively in the third round. Paul played Ali Farag of Egypt in the men’s quarter finals which he lost 11-9, 11-7, 11-6 in 48 minutes. Farag was on form, going on to win the men’s title.

Joelle beat French player Camille Serme in her quarter final match and was the only non-Egyptian player in the semis in both men's and women's singles. She then went on to play Raneem El Welily in the semi final where she won the first game, but sadly lost the next 3 in a total match time of 50 minutes. Click here to view a story on Joelle which aired on One News on Friday last week.

We wish Joelle, Paul, Amanda and Campbell good luck as they prepare for the World Championships in Chicago next month.