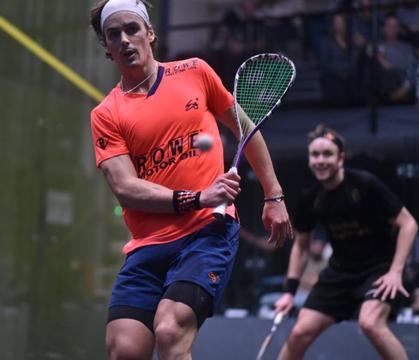 A top win for in-form Kiwi squash player, Paul Coll this morning in England at the PSA Channel VAS Gold tournament in the Weybridge.

The fifth seed won his second round match over world No.18 James Wilstrop of England in straight games despite still recovering from jetlag and fatigue from his semifinal performance a few days ago at the US Open.

Twenty-six-year-old Coll defeated Wilstrop 11-7, 12-10, 11-4 in 48 minutes reversing the result of the Commonwealth Games gold medal match on the Gold Coast earlier this year.

Coll will now face either third seed Taek Momen (Egypt) or Australian Cameron Pilley in the quarter-finals on Saturday morning NZ time. Coll’s top half of the draw has opened up with the defeat of world No.1 Mohamed ElShorbagy by Welsh player Joel Makin.

The Channel VAS event is where Coll’s career took off when he won the tournament as a qualifier in 2016 and his world ranking moved into the top 20 and now to No.8 in the world.