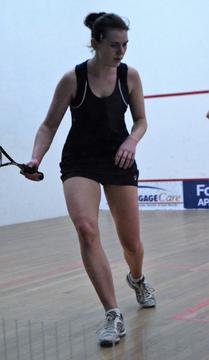 A team of four has been confirmed by Squash New Zealand to compete in the 2018 FISU World University Squash Championships in Birmingham, England in September.

“It’s a first for a Kiwi team to be sent to this tournament. Our goal sending a team is retaining our players and transitioning them from juniors to seniors ranks. The World University Championships provides a pathway and encourages our next generation of professional players to pursue tertiary education,” said Squash NZ High Performance Manager, Shelley Kitchen.

The team of four are a mix of proven experience and world championship knowledge with Epke, 20 is in her first year studying physiotherapy at AUT. In her junior squash career she won all the national junior titles and represented NZ at the Trans-Tasman junior test series and the world junior championships. Epke finished in the top eight at the World Junior Squash Championships in Poland in 2016.

She was fourth at the NZ Nationals in 2016 and was named the non-travelling reserve for the 2016 NZ World Women’s Team. She placed fifth at this year’s NZ Nationals.

Wiggin, 22 is currently studying part-time towards a Bachelor of Accountancy while playing squash professionally. Having travelled around Australia and New Zealand he has been ranked as high as the top 300 in the world. In previous professional events, he has made it as far as the quarter-finals.

In 2016 he led Massey to the NZ Tertiary Teams title. He finished third In the U/23 national championships last year and was a finalist at the 2017 Auckland Open. Wiggin will represent Auckland in the Senior National Inter-District teams event in August before heading to Birmingham. Due to his success in squash Wiggin has received numerous university blues awards.

Williams, 22 studied at Lincoln University and completed a Bachelor of Agriculture in 2017. Coached by Paul McFadzien and Rod Hayes, Williams has played for Canterbury at junior and senior level and plans to play in the Yorkshire league in the United Kingdom over the coming year.

Bailey, 21 has played squash for nearly 10 years. He studied at his hometown university of Massey, where he has just graduated this year with a Bachelor of Information Sciences. He now works as a Software Developer for Massey University.

He has been a Central District Rep for many years and was in the Massey team who won the 2016 NZ Squash Tertiary Teams Championships.

The World University Championships comprise of an individual championship, played over four days, followed by a mixed team championship played over three days. They take place 6 - 12 September 2018 at the new Sport & Fitness Club at the University of Birmingham. The same venue for the recent British Junior Open Squash Championship and the venue for squash (and field hockey) for the 2022 Commonwealth Games.