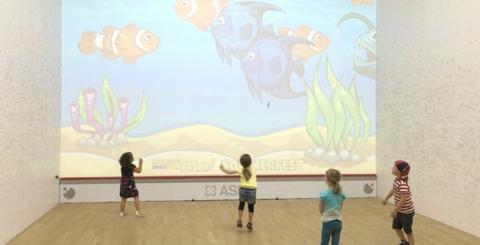 The future of squash has arrived at Howick Squash Club with a new interactive system, called InteractiveSquash to be put on display and checking out the new technology tonight will be members of the New Zealand Junior Squash Team who are on their way to the world championships in Chennai, India a day later.

InteractiveSquash is a new sports product designed by a Munich-based company, Fun with Balls GmbH and includes games designed to get players active and engaged like never before.

Using the accompanying smartphone app players can now choose from a huge range of solo, cooperative and competitive games with full-colour graphics and sound - all using the same racket and balls used in regular squash. InteractiveSquash training modules assesses and coaches players in completely new ways. For the first time ever, players can track their performances with insightful statistics and analysis.

In basic terms difficult pictures or logos are projected on to the squash hitting wall as interactive targets and combined with unique ball tracking technology players can then improve their skills as they complete courses and strategies, but best of all it has a fun side to it.

The concept is an opportunity to alter the way that squash is viewed in the minds of non-players, making it more attractive and engaging. It’s a chance to bring a new generation of tech-savvy players into sport The inbuilt coaching modules can be used for training with national and regional squads.

A generation have grown up in a technological revolution with their eyes permanently glued to a screen. This has also led to a change in the way people socialise, meaning the traditional way of using sport as a social experience is also changing. However, squash is one of the few sports that has the potential to lend itself to change through technology and attract the younger, tech-savvy crowds to the sport. Hence, interactiveSquash was born.

It’s new to the market with only limited systems installed around the world and Howick has the first in the country and first in the Southern Hemisphere.

The Howick Squash Club is one of Auckland’s most modern squash facilities, featuring four glass-back singles courts that can also be converted into two official doubles sized courts thanks to the innovative moveable walls.

Located on Meadowlands Reserve alongside the Cockle Bay Tennis Club, the Howick Squash Club offers participation opportunities for players for all ages and abilities with a range of membership and casual play options. Coaching is available for those looking to improve their game, and other amenities on site include a fully stocked pro shop, physio clinic, bar and kitchen, warm-up gym, and conference facilities.

The money for the system was donated by the Stevenson Trust headed by chairman, John Russell and club president, Brett Meyer says couldn’t have been done without his help.

“As a club we are thrilled and privileged to be the first club in New Zealand to have this modern system installed. Hopefully it will have a direct impact on increasing membership over time and encourages greater participation in squash at all levels.”