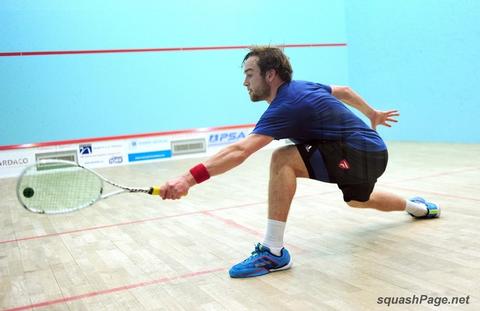 A win for third seeded Englishman Angus Gillams at the PSA pro squash event in Auckland as he continues his journey around the world in a bid to improve his world ranking.

Gillams ranked 83 on the PSA world rankings won his seventh career title, and second of 2018 with a four game victory over fourth seeded Frenchman, Victor Crouin ranked 88 on the glass court at the US$10,000 Squash XL Open in Avondale.

The left-handed Englishman had already won a title in Bermuda earlier this year and has played in countries such as Nigeria, Switzerland, United States and England in the last six months.

At the Auckland XL final the 22-year-old Gillams started quickly and raced to an 8-3 lead in the first set, holding on to take the game 11-5 by controlling the front of the court.

Despite playing each other for the first time both players knew each other’s styles having both competed in New Zealand over the last two weeks.

Gillams was again a quick starter in the second game, taking an early lead and not relenting for an 11-4 score. However the third game was a complete turnaround as the French 19-year-old quickly re-established himself to win the set 11-6.

The fourth game was a reverse of form again with Gillams taking back the initiative to move ahead 7-1 and then continue the lead to take the set and the match 11-3 in 40 mins.

All matches can be watched on demand HERE