Tough Loss For Kiwi In Semi Of SquashXL PSA 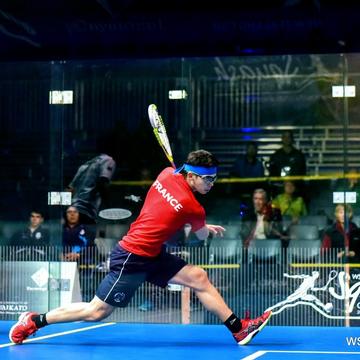 A finals spot was a step too far for Kiwi squash professional Evan Williams at the US$10,000 PSA Squash XL Open in Auckland.

The Wellington player ranked 108 in the world was beaten in four games in his semifinal after he had won the first game 11-7 against third seed and 83rd ranked Angus Gillams. However when it came to the second game Williams was ahead 8-5 before his opponent fought back to a dramatic 10-10. It was then a number of hotly contested points as Gillams eventually went on to win the set 13-11.

The third game had the Englishman racing to a 7-0 led, although the Kiwi got back in the game to 8-9 but then Gillams took the game 11 - 9. In the fourth the third seed won was too strong taking the game 11-6 in a tough 56 minutes.

Williams a recent finalist at the New Zealand National champs, has scored good performances in PSA events this year with a semfinal finish in Canberra followed by quarters at Palmerston and Invercargill and now the semis in Auckland.

For Gillams making the final will be a chance for his second PSA title of the year after winning in Bermuda in March.

He will play fourth seeded teenager Victor Crouin of France who is ranked 88th in the final. Crouin took four games to beat second seed Josh Larkin (Australia) in his semifinal.

Crouin is regarded as one of the best young players to come out of Europe and is also attending Harvard University in the United States. The Frenchman has made three other PSA finals this year for one title and two runners-up finishes.

The final is at 5 pm on Sunday 1 July on the glass court at the Squash XL Club. Entry is free for spectators to watch and for those that cant make it to the courts the event will be live streamed HERE, HERE and on NZSquash.TV facebook page.