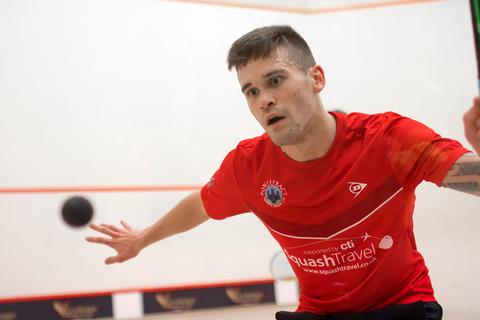 New Zealand squash pro, Evan Williams has scored one of the best wins of his career by knocking out the top seed and world No.61, Rex Hedrick of Australia in the quarter-finals at the PSA Squash XL Open in Auckland.

Williams, a member of the New Zealand Commonwealth Games team on the Gold Coast with a current world ranking of 108 beat the in-form Hedrick in four games 11-7, 11-4, 3-11, 11-9 in 56 minutes in front of a good crowd to move into the semifinals of the tournament.

A recent finalist at the New Zealand National champs, Williams has had solid performances in PSA events this year, semfinal finish in Canberra followed by quarters at Palmerston and Invercargill and now the semis in Auckland, plus a second round result in singles at the Commonwealth Games

The 28-year-old from Wellington will now face the third seeded Englishman Agnus Gillams who beat qualifier Velavan Senthilkumar (India) 11-9, 11-3, 11-9 in 35 minutes in his quarter-final.

In the other semifinal it will be second seed Josh Larkin from Australia against fourth seed Frenchman Victor Crouin.

Larkin too four games and 39 minutes to win his quarter-final over Irishman Sean Conroy while Crouin was a straight game winner in his match over Malaysia’s Darren Rahul Pragasam.

Semifinals are Saturday afternoon with the final on Sunday 1 July on the glass court at the Squash XL Club. Entry is free for spectators to watch and for those that cant make it to the courts the event will be live streamed HERE, HERE and on NZSquash.TV facebook page.