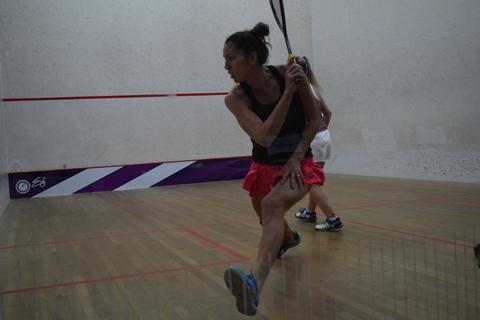 It was business as usual as the top seeds continued their recent domination of the New Zealand squash national titles with straight games victories to Commonwealth Games heroes, Joelle King and Paul Coll in their respective finals at Henderson Squash Club.

For world No.4 King it was a seventh title, not that she’s counting and it was a win over her doubles partner Amanda Landers-Murphy.

The first game started quietly with scores locked at 2-2 before King reeled off five points in a row to go ahead 7-2 and then win the game 11-8. The second game had King ahead 7-5, but then a loss of concentration saw Landers-Murphy win four points in a row to race ahead 9-7 and then have a game point at 10-8. However it was King who gained the momentum again to take the game 12-10.

In the final game it was King, 29 who stayed ahead to complete the match with an 11-6 victory in the third in 27 minutes.

“I’ve made no secret of the fact that this is one of my favourite tournaments of the year. It holds a very special place in my heart….I’ve been playing it since I was 11 years old. Amanda and I are really good friends off the court as well. It’s been nice to see her playing really good squash too,” said King who now is taking a well-earned break on her first time back in New Zealand since prior to the Commonwealth Games.

“I’m looking forward to kicking my feet up a bit and have a mental break and enjoying being home a bit with friends and family and just hang out really,” said King who’s next tournament isn’t until late August.

In the men’s final Coll ranked 10 in the world won his fourth title in succession as he put paid to the efforts of second seed and Gold Coast team mate, Evan Williams from Wellington.

Coll, 26 played his typical game of long rallies until finally getting an opponent out of position before being able to execute a winner. Coll won the contest 11-5, 11-3, 11-2 in 35 minutes and now returns to Greymouth for the first time in several months for a week before going back to his training base in the Netherlands.

Williams will now play the PSA events in both Invercargill and Auckland in a bid to improve his international ranking of 116.