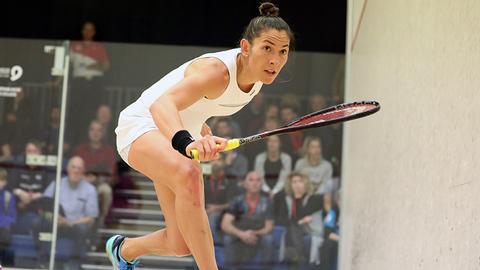 New Zealander Joelle King is Squash Player’s Women’s Player of the Month for topping the individual medals table at the 2018 Commonwealth Games.

The 29-year-old world no.4 struck gold in the women’s singles and doubles, the latter with Amanda Landers-Murphy, and lifted a bronze medal in the mixed doubles with Paul Coll.

"Probably a year ago three medals would have been beyond my wildest dreams - but the way this year has been going, I wanted three golds to be honest,” King said. “But to come away with two golds and a bronze is pretty amazing.

"It's not just me, though, it's all the guys who have been watching me all the way through the singles and picking me up each day. It's been pretty amazing.”

“We've had some great names that have come through the squash community from New Zealand - so it's a privilege, to be honest, to be the first one to do it,” she said afterwards.

"It was typical final squash - a big occasion and both players wanting to give it everything they had. All I can say is she played really well - she just did not go away, she didn't let me have it all my own way, that's for sure."