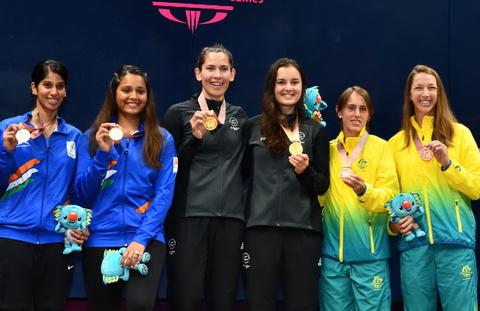 It was fitting that the final match on the final day of 11 days of intense Commonwealth Games Squash competition at Oxenford Studios in Gold Coast produced a second gold medal for hosts Australia - when Zac Alexander & David Palmer held off English rivals Daryl Selby & Adrian Waller in a thrilling near-hour-long Men's Doubles climax which went the full distance.

It was almost certainly the farewell Games performance of veteran campaigner Palmer, the 41-year-old former world number one from New South Wales who has featured in the sport's six appearances in the Commonwealth Games since 1998, and has now extended his record medals haul to nine.

But it was New Zealander Joelle King who topped the individual medals table in the 2018 Gold Coast Games after striking gold in the Women's Doubles, to add to her Singles gold and Mixed Doubles bronze.

Alexander & Palmer, the fifth seeds, reached the men's final after seeing off both the second and third seeds - and took the opening game of the final against the No.7 seeds.

But the tables were turned in the second when Selby and Waller levelled the match, for the loss of just three points. The home favourites regrouped, changing their tactics early in the decider before delighting the loud and capacity crowd with their 11-9, 3-11, 11-6 victory after 57 minutes.

"I said from day one, a year and a half ago, when I said I wanted to play, I wasn't just here to make the numbers up - I still felt, deep down, that if things went my way I had a chance," said Palmer.

"It's been great with Zac. We rode under the radar a little bit this week as fifth seeds - it's been nice not to have the pressure on us. The draw went our way. We snuck through and stepped it up when we needed to - in the quarter-finals we beat New Zealand, and last night was great as we took care of the Scottish team really well.

"It maybe wasn't our best squash today - but they made it difficult for us, the way they played. But we found a way."

Speaking of his partner Alexander, a 29-year-old from Brisbane who has now won his first medal, Palmer continued: "He was great, he's so strong on the forehand, he reads the ball well, he hits the ball cleaner than anyone - and tactically he's very good as well. We played off each other - I'm very happy for him."

Alexander added: "It's unbelievable. It's as good as it gets.

"They outplayed us in the second game - in the third game we had to control the game . We clicked just a few minutes into that last game, and started to play down the middle a bit more - and that worked well. It was huge."

When asked if he might return for the 2022 Games in Birmingham, Palmer said: "No - this is it, this is it! This is a dream come true to finish like this. I'm going to finish on a high!"

King, the world No.4, partnered Amanda Landers-Murphy to an 11-9, 11-8 win in the Women's final over Joshna Chinappa & Dipika Pallikal Karthik, the Indian pair who won gold in the 2014 Games in Glasgow.

It was the climax of an arduous 11 days for 29-year-old King whose tally is now five medals over three Games since 2010.

"When you play such a big match, on such an occasion - against a quality team - and come out on top, it's unbelievable," said King. "I'm on cloud nine at the moment.

"Probably a year ago, three medals would have been beyond my wildest dreams - but the way this year has been going, I wanted three golds to be honest. But to come away with two golds and a bronze is pretty amazing.

"But it's a team effort. It's not just me, it's all these guys who have been watching me all the way through the singles and picking me up each day. It's been pretty amazing and I can't wait to share it with them."

Speaking of Landers-Murphy, the 26-year-old world No.41 who partnered her to world titles both in 2016 and 2017, King said: "She's the dark horse of the team, she's the quiet achiever. She works really hard all the time. I've known her for a while now and we've become really close. I'm really happy for her and proud that she's put in the effort and got the reward. She's carried me most of the week - brought me through when I was a bit flat and down.

"I leave the village at 5am tomorrow morning for El Gouna. I'll probably spend the first day on the beach and let my body heal, then switch over to singles - it's a big tournament, a World Series event, and I don't want to let the momentum of the year be broken now. I've worked hard to get here and I'm going to do everything I can to put in my best performance there."

Grinham was celebrating her eighth Games medal - and agreed that today's success was awesome.

"But that's what we come here for, to win medals. I was close to walking away from this Games without a medal. Luckily we turned it on today and had an awesome match. And it was quite comfortable - a lot of the games this week have been so close.

"Donna's been incredible, so solid all week. It's brutal to play in both events, all week."

It was late the previous evening that Urquhart and Cameron Pilley treated the crowd to a gold-medal-winning performance in the Mixed Doubles.

"It's a strange feeling," said Urquhart. "We played the last match last night, a late finish. But I had to be ready for an early start this morning. I think it's adrenaline that got me through, to be honest. But now that I've finished I'm probably going realise how sore my body is.

When 41-year-old Grinham was asked if she would make the 2022 Games, the former world number one, replied: "Never say never - but very likely not!"

Willstrop, the men's singles gold medallist earlier in the Games, said after his Doubles win: "They count for so much, these Commonwealth medals - it's a huge thing for anyone winning medals, in the village people applaud it and you're up on a board.

"And yesterday we were a million miles away from thinking about that - it's incredible how you have to turn yourself around. You wake up the next morning and have another go!"

His partner James, aged 24, added: "After an hour and a half of drama and stress yesterday, I wouldn't have dreamed of thinking of coming back on court again today!

"We never go through the emotion of losing at squash, then having to play again. It was reconciliation today - we still realised there's a huge amount to play for and we said fourth is going to feel a hell of a lot worse than third is. We can hold our heads high now knowing that we've done everything we could. We're really happy that we came through today."

When the subject of the next Games came up, 34-year-old Willstrop replied: "Declan should be there, but it's different for me - I can't take anything for granted. All I know now is that I'd like to play squash for a bit, if I can. I have to take it month by month.

"I'm just so thrilled that I've got my body to a point where it can get through two weeks of this. I never dreamed of that four years ago."